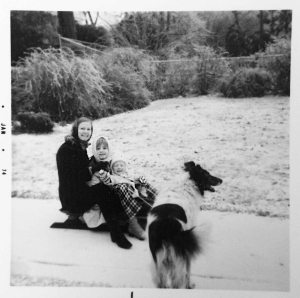 After her fifth or sixth miscarriage, my mother, resigned to the reality that a baby might not be in the cards, went with my father to the animal shelter and came home with a puppy. Without much debate they named the small, black-and-white ball of fur Happy, partly because the dog’s mouth was shaped in a permanent smile but mostly because Happy lifted my mother’s spirits.

On her first night in this strange new home, Happy was placed in a small box on the floor by my mother’s side of the bed. Within a few hours, if that, she found her way onto the bed, snuggled next to her new human companion.

I was born a little more than a year after Happy came to that house on Carr Avenue – which is how I know that anyone who denies the magical healing power of dogs is either ignorant or lying.

Happy, who in her first year of life had narrowly escaped water moccasin bites and drowning when snared in a trout line on the Spring River with my father, was delighted to have the new, safer job of babysitter. She was my mother’s constant companion except for the brief time when I napped and my mother took a bath.

When I was two (give or take), my mother, Happy and I walked to the post office, as we often did together on pretty days. And as she often did, my mother left Happy sitting outside to wait while we went in, checked the post office box, and then returned. Only this time when we exited the post office, Happy was gone. My mother called and searched. She went back to the scene of the disappearance every day, only to come home alone again. Finally, she gave up.

At a party a year or so later my parents ran into friends who told them about meeting a dog that “looked for all the world just like Happy.” Phone calls and introductions were made, and when the lady of the house opened the door to my mother, Happy – all 60 pounds of her – ran at top speed and leapt right into my 95-pound mother’s arms, both of them whimpering and crying.

My parents told me this story repeatedly, most often while reading Harry the Dirty Dog – one of our favorite books to read together – because Harry, the white dog with black spots, was not altogether unlike Happy, who also never again ran away from home.

I was in sixth grade when Happy died, so it would be true to state that the Happy years were my wonder years, growing from infancy into adolescence with a perpetually smiling dog at my side. In testament to Happy’s wonderfulness, the classmates who had been my friends since our toddler days wept openly at the news of the dog’s passing, even though the onset of sixth grade had all but erased public sobbing. Dogs can do that to humans.

The fact, then, that insufferable, miserable stretches of time are often referred to as “dog years” seems an egregious insult. There are other animal species – the northern cardinal, for example – with similar 10-15 year lifespans. But we don’t say of the unhappy job, relationship or interlude, “it was only three years, but they were northern cardinal years.”

A dog’s year is, of course, no shorter or longer than any other year. As Earth spins on its axis and makes its way around the sun, we’re all of us – dogs, humans, cardinals, trees and oceans – marking precisely the same passing of time. We humans tend to think, though, not in the incremental but rather in the total allotment and the length of that allotment relative to others. We celebrate lives that stretch past the average mark and mourn those cut short. In our relentless pursuit to extend life and forestall aging, we look to everything from simple daily exercise to cryogenic intervention.

As brain science and research catch up to ancient wisdom, though – with MRIs and longitudinal studies as proof – what we know now is that meaningful relationships are better health protectors than any fish oil, t’ai chi class or physician. From Bruce Perry’s work in child trauma to the 75-year Grant and Glueck study, there is a tall and growing mountain of evidence behind the hackneyed, trite, overly-simplistic adage: love is all we need.

Which brings me back to dogs in general and Happy in particular. As any dog person will attest, dogs begin, and most often end, their lives wide open in love. If the term “dog years” refers to unpleasantly accelerated aging, “puppy love” is its counter-balance. Until (unless) given repeated reason to behave otherwise, dogs eagerly display innocent, limitless optimism with little or no self-protectiveness.

This quality makes dogs magnificent comforters and confessors. Tell a dog of an overdrawn bank account, humiliating mistake, illicit affair, or any regret, fear or infirmity, and the response will always be the same: thumping tail, nudging nose, and an insatiable desire to curl up, hip-to-hip, in warm companionship. There is a kind of pure safety in loving and being loved by a dog that can teach us a great human lesson, if we’re willing to learn, about the implicit requirement that offering and accepting must be equally reciprocal. Inherent also in the lesson, though, is the fact that heartache is part of the package.

In Happy’s final year she lost control over her hind legs and related functions in that part of her body. My mother would, at frequent intervals, lift Happy’s hind quarters and help her walk out to the front yard. There were pads and newspapers in the kitchen, in case of an accident. But by this advanced age Happy knew exactly what was supposed to happen where, and my mother said Happy deserved the dignity of not having to soil the wrong places. This image of my mother, hands gently supporting Happy’s hips as they teetered together, is as clear in my mind as any other.

Whether Happy’s last breath was in our living room or in the tender care of Dr. McGehee, I’ll never know. My mother was unable to talk about it. In contrast to her usual stoicism, my mother was raw and unhurried in grieving Happy’s death. It wasn’t so much that she broke when Happy died, as that a piece of my mother broke open, created a new space where the love and loss lived together, where giving and receiving had become one.

Broccoli Rabe and Sausage (or not) with Orecchiette

That’s a wrap. ❤️
I call this dress “The Sound of Music.” If you knew my mother, then you probably don’t need another word of backstory to understand the reference. But for everyone else, the story, as I know it (and who’s to say otherwise, because all the characters are now in the Great Beyond) is this: these curtains belonged to my great-grandmother on my father’s side. Nana had them in the house on Elzey, the one that was big enough to hold all of the then-grown Larkey children and their spouses and children for a little while during the Great Depression. Nana gave the curtains to her daughter who then gave them to my mother when a Christmas Eve fire in our attic left us displaced and my mother and sister (I was in college) moved into a short term rental house two doors down from my great aunt, who helped my mother furnish the rental. My mother gave the curtains to me when I bought my first house. I packed them into a zippered storage bag when I moved to Omaha and then toted them along for all the years that followed, right up until this winter when I was frantically searching for the box of French lace that I saved, from my mother’s sewing things, to make my daughter’s graduation dress. I still haven’t found that lace. The curtains, then, were at first a substitute for the original plan. They were plan B. My mother, the hand-sewing, piano teaching, enterprising writer, always had a plan B (and C, and D, and so on). My hand stitching isn’t as delicate as hers, but I think she’d approve. Who’s to say otherwise?
“Make it pretty on the inside,” that’s what my mama always said.
Tipsy Tumbler just arrived, so it’s a party now! Corner of Peabody and Belvedere (fenced lot - park on Belvedere). We’re here til 4!
Can’t let today end without a little Yoda and Chewbacca. #maythe4thbewithyou
%d bloggers like this: