In early spring 2007, before … well, before so many, many (many) things that have happened in the past decade, a neighbor asked me to join her book club. I declined, responding that I barely had time to read a cookbook, much less a book-book. That encounter sparked the idea to start a cookbook club, a kind of gathering for which there was no model at the time, at least not that I knew of.

Our first cookbook club meeting was held a month later, and we continued off-and-on for almost two years. There were eight of us, all experienced home cooks who were juggling careers and relationships and young children. Our monthly gatherings rotated from house to house. The hostess was responsible for only two things: hosting and selecting the book for the next meeting. The guests brought the food: two appetizers, two sides, an entrée, a dessert, and a cocktail, all from the chosen cookbook.

We cooked our way through Lynne Rossetto Kasper’s Splendid Table, The Neiman Marcus Cookbook, several of Ina Garten’s books (Barefoot in Paris was our favorite), and an utterly forgettable Tex-Mex book written by a handsome but talentless celebrity chef. For Christmas we cooked from A Finnish Christmas and got so drunk from our first sampling of glögg that to this day most of that night remains a blur.

Sometimes we reviewed the recipes and made notes. More often, we ate, drank, talked, and went home without any written record (or photographs).

One month we punted, ordered out from a local Ethiopian restaurant, and considered the evening a spa-like treat. It’s been more than a decade, and I remember that night as vividly as if it had been last month. If that doesn’t prove the power of gathering with friends and sharing food, I don’t know what else would.

Alas, our little group disbanded. People moved; life got busy; things changed. But the memories have endured, for all of us.

It has now been almost a dozen years since I started the cookbook club. In my tiny little section of the universe, I’m still cooking and still writing, and although those two things temporarily wandered separate paths, they are back together again in both thought and practice. I’ve recommitted to a more regular writing schedule and renewed the weekly(ish) dinner plans that include links and suggestions for things that either sound promising or that have proven worth the time.

A few weeks ago a friend waved to me over the bays of produce in the grocery store: “I’m so glad you’re sharing dinner plans and recipes again!” she called. “I’ve been missing them!” Ah, cooking: the great connector, and my life-long love.

Often, the links I include in my weekly posts will feature a recipe from Bon Appétit, a magazine that has lived in my kitchen, literally and figuratively, since the summer of 1987. (That recipe you see in the picture, for lemon mousse with raspberry sauce? Still make it. All the time. That’s what’s in those pretty little cups in the featured picture. Seriously.)

While I do still tear pages from the real, paper magazines sometimes, more often I’ll rely on the online edition. Which is how, with great joy, I discovered YOUR cookbook club.

Your club is entirely different and yet entirely the same. Your revisiting The Silver Palate Cookbook? Magnificent. December’s Martha Stewart Entertaining extravaganza? Oh, you have no idea… (My catering business in Boston in the late 1980s… My mother’s horror that “that IMPOSTER” was making money from plagiarizing Junior League recipes… So much cooking and entertaining; so many memories….)

And so, dear Bon Appétit, as you march boldly ahead with monthly cooking and gathering and writing, perhaps you’ll consider a few suggestions from a woman who has a few years of perspective on this whole cookbook club notion:

But, most of all, don’t quit. Trust me on this.

P.S. This story may sound familiar to long-time readers of Jenny’s Lark, because I wrote about it, back in November 2013, the year this blog started to take shape as something I wanted to continue. Part of what I wanted to continue was writing about food and cooking and the kinds of human connections that happen in the process. The kinds of connections made, perhaps, through a cookbook club. Go figure…. 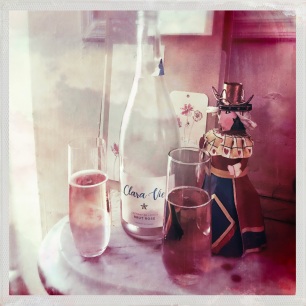 Having spent most of Valentine’s week in bed with a cold (that was probably the flu), I’m thinking about foods that offer some comfort and fortitude – both for me and for the people in my house who hopefully will not catch whatever I’ve had.

The Peruvian chicken recipe has been in my NYT Cooking recipe box for months, and I’m finally going to give it a try. If there are leftovers, I may use them for Sam Sifton’s panzanella (I love the way this no-recipe recipe is written, so I hope you can read it through the paywall). Our neighbor brought beautiful eggs home from her farm, so it would only be right to feature them in at least one dinner offering, right?

And no, no one in my house is going to be excited about the cauliflower steaks. But it’s worth a try, anyway.