The pen, the sword, you know the drill.
– a note of encouragement from the funny and indefatigable Ross Murray, written 12/16/16

In the fall of 2016, Outside magazine published an obituary for the Great Barrier Reef. It was satire, a cynical commentary piece (though not clearly labeled as such), and to scientists’ great alarm the piece quickly went viral. While the intent was to instill urgency, scientists feared the response would be paralysis, or – worse – full surrender. The problem with such over-the-top writing, one scientist suggested, is that it often has the opposite of its intended effect.

What’s happened since that article ran? Half of the Great Barrier Reef has died. And U.S. carbon emissions increased in 2018 after eight straight years of decrease. “The big takeaway…is that we haven’t yet successfully decoupled U.S. emissions growth from economic growth….”

It’s been a long two years.

And, in truth, it’s been worse than I imagined. This dirge with jolts of staccato (Scaramucci? no playwright could have invented better…) has reshaped everything from marriages to macroeconomics.

To anyone who still hopes, after two years, simply to hide out, duck and cover until it’s over: it may never be over. Are we now at the inflection point, the one that might lead back to normal (as if “normal” were ever the case)? Who knows.

For your consideration: Almost all illegal drugs come into the country through legal points of entry (like airports, where TSA agents – our real border security – have gone more than three weeks without pay).  (Want to read more? Here’s The Cato Institute’s “Why the Wall Won’t Work” and  “The Conservative Case Against the Border Wall,” by former Reagan staffer Donna Wiesner Keene – two sources I found here.)

Also: Technology has already taken 90% of the jobs humans used to do. And the “skills gap” was a myth.

Meanwhile, tree branches fall, dogs get lost, neighbors need help. And if we let it, our collective impatience for big things could easily get in the way of doing the small things that can ultimately make the biggest difference, and that make life worth living.

There is always something to do: Call your furloughed neighbor. Read. Write. Keep showing up. Pay attention, but also have a sense of humor. Take pictures. Greet fiction with facts. Agree to disagree, but don’t shy away from speaking up. Cook. Gather. Rest. Art harder, so as not to die from the truth.

There is always something to do.

Do I still feel shiny, buoyed by the start of a new year? No; but I didn’t feel shiny last week, either. It isn’t vigor; it’s clarity.

Now off for a walk, with my vomiting-on-the-sofa, ill-behaved dogs. (I love them; it is hopeless.) 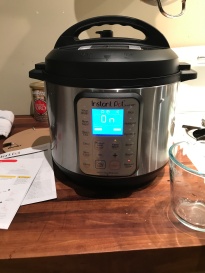 My sister gave me an Instant Pot for Christmas, because my sister also loves to cook, and she loves her Instant Pot, and she thought I might like one, too (“very popular!” as my pal Michelle said).  So I’ve been experimenting, learning how to make both inedible goo (which was supposed to be chicken burrito bowls) and delicious spaghetti. I also cooked my favorite slow cooker buffalo chicken (chicken breasts + a bottle of Frank’s hot sauce – no, not kidding), and it was just as tasty cooked under pressure in 8 minutes as stewed slowly over 8 hours.

I’ve found two great resources, one from New York Times Cooking and the other at The Kitchn. Verdict so far? If nothing else, it’s been a fun family project and given us something to talk about at the dinner table.

This week I’m going to try the slow cook feature, making a simple pork stew using a roast that’s been languishing in our freezer since the fall.

Also inspiring for this week? This story about the man who is cooking through all of Ina Garten’s recipes. As if I needed a reason to reach for those beloved and ever-trustworthy books….

Farro Salad with Toasted Pecans (will top with poached chicken)