That’s from my friend Barbara, admonishing me at the time (I was 7 months pregnant with my now-17-year-old son) to find excellent child care, throw myself into high-paying work, and save the “flexible hours, work from home” gig until my first-born hit puberty.

I didn’t take her advice, but I should have.

I have, however, taken to heart this wisdom, from Adair Lara (originally published in The San Francisco Chronicle in the 1960s and republished in 1996): Young children are like dogs, eager to follow wherever you go, attentive to whatever you put in front of them. Teenagers are like cats, surly and anti-social until they hear the sound of kibble or until, at a time of their own choosing, they suddenly want to snuggle and purr.

When I started writing this post, on Thursday 4 October, I had a weekend plan that included, among other things, more writing. Then my music-loving, free-spirited, Libra daughter, days away from turning 15, came home with a different plan: a last-minute dash to Nashville to see Ed Sheeran. “Come on, Mom. Nashville’s not that far, and I found some good tickets that aren’t expensive, and you love Ed Sheeran too, and it’s my birthday.”

(and you have to love the photo bomb…)

The next weekend, my girl and I went Over The Edge together to raise money for Kindred Place, where I’ve worked for the past two and a half years on a turnaround/rebranding effort. We had a ball.

And now is it mid-November, the ginkgo trees magically shedding their leaves in one sudden, dramatic,

Life, for those of us who work outside the home and also inside the home, is like a giant game of Tetris. All day long the pieces come, and the working mother shuffles them around to make everything fit, trying to be tidy about it, but sometimes there’s a errant hiccup in a line, and sometimes two lines, and sometimes things stack up unattractively all the way to the top and it’s time for everyone to have scrambled eggs for dinner and go to bed early.

Laugh all you want; Tetris got me through 12 hours of labor, and it has been my mental model ever since (though, more likely, it was already my mental model, before I even discovered the game). Apparently I’m not alone. There have been several studies involving Tetris, including a recent one that linked reduced anxiety to – yes, you guessed it – playing Tetris while waiting. A 2009 study linked Tetris to improved problem-solving. So there.

Know what else helps problem-solving capacity?

Yes, you guessed this, too: art

At its core, drawing is a problem-solving tool. Scientists are often avid doodlers, like the Fields-Medal-winning mathematician Maryam Mirzakhani, for instance. “The process of drawing something helps you somehow to stay connected,” she explained in a 2014 interview. “I am a slow thinker, and have to spend a lot of time before I can clean up my ideas and make progress.”

Anna Quito, “Drawing is the best way to learn, even if you’re no Leonardo Davinci.” Quartzy; September 15, 2018.

Sound familiar? Right; it has been the recurring theme of the last two years around here.

Need a refresher on this topic? Revisit, if you like this 2014 article in PRINT magazine, or How Art Changes Your Brain. “Forget Sudoku,” the article opens. “Draw.”

Art – looking at art, making art – has a tangible positive benefit on cognitive ability. It is essentially valuable to human development individually and humanity as a whole.

So, even if you think you have no skill or talent, pick up a pencil this Thanksgiving weekend and doodle for a bit. It will help your brain, if nothing else.

And while you’ve got that pad and pencil…

The Enduring Power of Paper

Well, aren’t you the clever one today? Yes, you guessed it: Books and snail-mail.

In fact, mail makes EVERYONE feel special; and sending mail gives a psychological boost, too.

Instead of frantic Black Friday shopping, how about settling down with some note cards and a pen for a bit, then curling up with a book? Do it

Need some help with the note-writing part? (surely you knew this was coming…) 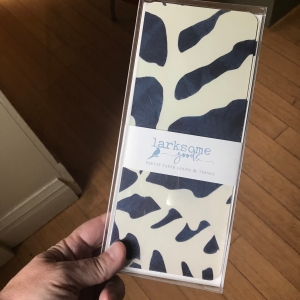 The first card I designed for Larksome Goods was a flat card featuring a reproduction of a cyanotype print on the front, blank on the back. The card format was (is) called “Slim Jim,” and it remains my favorite card format of all time. It fits in a standard #10 envelope, offers plenty of room for writing, and it’s a save-able, post-able memento for the recipient.

Since that first card, the Slim Jim format has become a standard for just about every design I’ve added. The stationery wardrobe includes a set of Slim Jim cards (in addition to two sets of smaller, traditional A2 sized and enclosures).

But my absolute favorite version of my favorite format card is this one, the chandelier card: 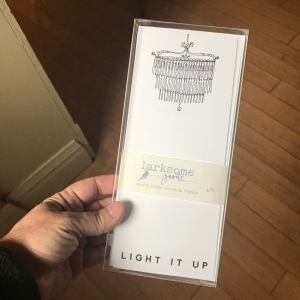 I love it for sentimental reasons, because it’s a drawing of a real chandelier, in my real house – the chandelier that Bernard took apart, crystal by crystal, and re-built for me for Christmas one year (actually, there are two of them, and he rebuilt them both; lucky me!).

But what I really like about the chandelier cards (and yes, I’m biased) is that they work for every single occasion you can think of. Need to cheer someone up? LIGHT IT UP! Want to say thanks for a great dinner party? LIGHT IT UP! It’s a greeting card, but also not a greeting card. There’s plenty of room to write – on the front and on the back. You can even color the card if you want. Very versatile. Perfect to keep in your purse (or briefcase) so you can send a note when the idea strikes you.

Right, I know; I’m biased. And also shamelessly promoting the side hustle – the gig I started because I didn’t take Barbara’s advice to work like hell and sock away money 17 years ago. It’s an immensely enjoyable side hustle, though, for real.

But if you want something else, there are plenty of wonderful options available at any local stationery or book store. So load up, and get busy writing this holiday weekend.

Need a good book? Pick up Tana French’s latest, The Witch Elm. It might be my favorite of all her books, though I love Faithful Place enough to read it a second time.

Need some shorter things you can finish quickly?

To Restore Civil Society, Start with the Library.

How to Talk to People, According to Terry Gross.

or, (even though it’s from May)

or, if you really want more (spectacular) pictures than words,

Happy Thanksgiving to all. Enjoy time with the dogs and the cats, and all the adult humans, too.

Here’s a look at life in September, October, and November. Yes, my son is building his own car (taking two old 4Runners and making one working vehicle). Yes, our neighbors did project a movie in their driveway – starting the season early with Christmas at Graceland and Home Alone. When the screen came down, the images appeared on the neighbor’s house. Priceless. 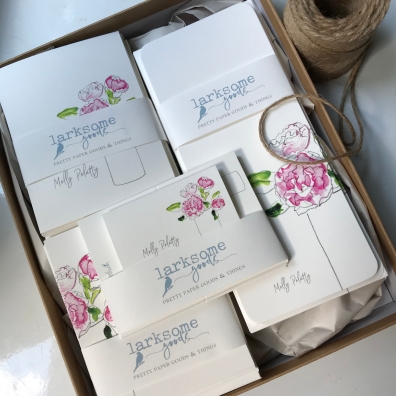 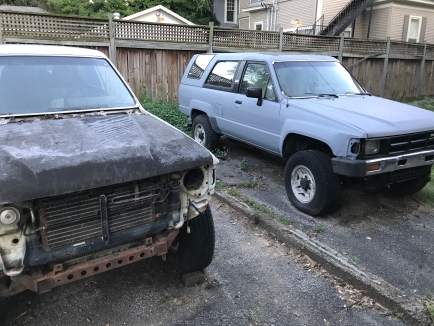 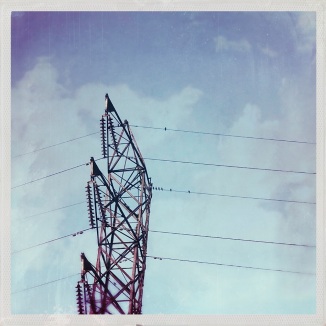 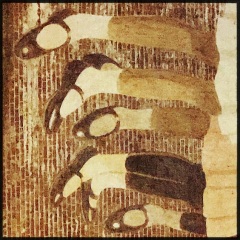 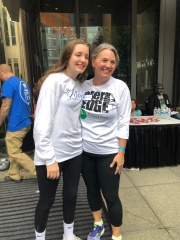 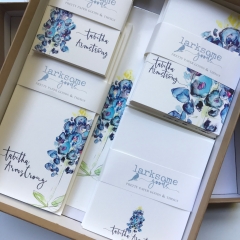 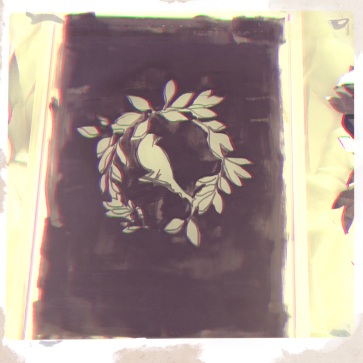 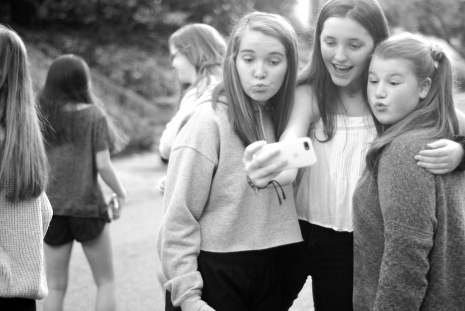 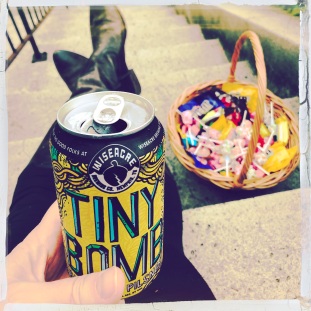 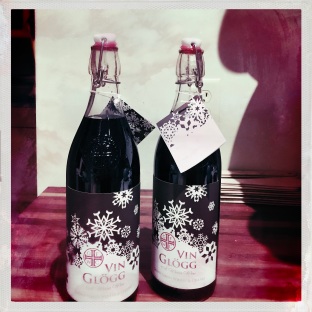 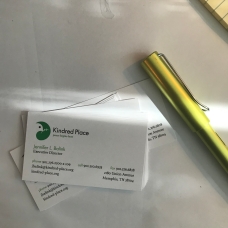 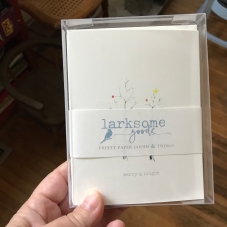 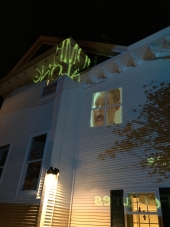