When last we were together in this sort of month-in-review (month-in-preview), listicle way, it was the end of May. Hydrangeas were in bloom, tomatoes were still just tiny yellow flowers (if that), I was preparing for some big changes in my work-work, I had just re-booted Larksome Goods as a stationery and paper goods start-up, and I was about to read the lovely, charming, funny novel Less by Andrew Sean Greer.

What I didn’t know back then, at the end of May, was that I was about to spend so many hours (so, so many hours) in the car with one or the other of my two teenage children, going to tennis tournaments, camps, and various visits to friends. So much driving.

What I did know but was only half thinking about was that I was also getting ready for another show, a commitment I’d made in 2017 and that I planned to work on a little at a time over about a year, thinking the show opened in November 2018.

So, here’s a funny story:

I was delivering stationery to an artist friend (whose work I really like).

And she said: Thanks! I’m having a show at Eclectic Eye this fall.

And she said: Mine’s in November.

And I said: Mine too!

And then I got in my car and thought to myself: now how’s that possible?

Of course, it wasn’t possible. When I looked back to confirm the dates (I know, you’d think I would have done this sooner), my show was scheduled to CLOSE in November and open in September.

painting, and sometimes finding time for a little reading, and not busy writing much at all. Also: not much cooking.

Happily, the view from the car and the things I’ve talked about with my children have given me plenty of art-making inspiration. There is something about the Mississippi Delta in summer that is steamy and delicious like nothing else, like nowhere else. Driving through Arkansas, Tennessee, and northern Alabama offers a different kind of solace and solitude from the open skies of Wyoming and Montana – different, and no more or less beautiful.

I’m now in the process of getting everything ready to hang. (See, there I am, in my yellow dress, with my hair pulled back in a struggle bun, held by a pencil… for real….)

The show opens Friday, September 21, at Eclectic Eye on Cooper. If you’re in Memphis, I hope you’ll come have a sip and and a visit. And, while you’re there you can look at the gorgeous glasses – frames, readers and sunglasses. Ooh-la-la!

I wrote, back in May, that we were about to re-brand the agency I’ve been working with for the past two years. Established as a child abuse prevention agency in the early 1980s by local Exchange Clubs (service clubs), we’ve carried the shorthand name, “Exchange Club” ever since. And we are lucky still to have the support of the local clubs. The challenge has been that we aren’t an Exchange Club, and the name has been a source of confusion.

So we started asking (ourselves and others): what do stand for, what’s the essence of our work? The shortest, and best answer, is empathy – the ability to share and understand the feelings of another person.

When the branding firm presented its recommendation to us, one of our counselors said, “Ohmygosh! That’s us! The right word found us!” And this, based on all my years of marketing experience, is pretty much the best thing that can happen in a branding presentation.

Over the coming months we will be reintroducing our organization as Kindred Place, where the work we do – ending family violence – reminds us of how we are all connected in our humanity and in the need for compassion – for ourselves and for others. Kindred Place: peace begins here.

[Want to help us bring this important work to life, and have some fun in the process? Sign up to go Over The Edge for a Kindred Community on Sunday, October 14. Yes, we’re rappelling down a building to show the importance of being brave. And you’re invited to join us. Not in Memphis? Super. Maybe you’ll consider making a donation to sponsor me or any of our Edgers.]

[ALSO, P.S.: I am terrified of heights. I won’t willingly go to a rooftop party, I’m so afraid of heights. But when I think about the courage it takes to confront family violence (something I’m fortunate not to know first-hand), I realize how ridiculous it is to say I’m afraid of heights. So there.]

A bit of reading…

What didn’t I do this summer (at least not much of it)? Read.

I made it through only three books this summer: Less, Americanah, and Victor La Valle’s Destroyer – all selections of the world-traveling, terribly curious, appropriately cynical, very liberal, co-ed group that is not a book club but that meets every month to eat dinner and talk about a particular book. (And yes, that last book on the list really is a graphic novel; and it prompted the most interesting and lively discussion – about characters and heroes, about writing conventions, and about what constitutes a “book” that’s suitable for a group discussion. Highly recommend.)

I’ve also kept up with the news just enough to be informed but not so much as to go insane. And I’ve read some interesting non-newsy articles, too, including these (my three favorites are at the top) that were compelling enough for me to hit the “save to Pocket” button:

Meanwhile, in the kitchen…

Do I still cook? Sometimes, yes. But not as often (or as creatively) as I’d like. Our family schedule is so crazy that we are usually pressed for time and (too) often resort to the working mother standard: breakfast for dinner, or chicken paillards with a Mark Bittman-style salad. To break out of that rut, if I have the time, my go-to source for inspiration is “What to Cook” from The New York Times (subscription required – totally worth the price).

The real cooking treat this summer was that Bernard made several batches of carne adovada, and our kids are becoming less averse to it as they get older. Now that it’s September (Hatch season), we (meaning Bernard) will restock the freezer with stack of Ziploc bags full of roasted green chile, and we’ll have green chile corned beef, green chile omelettes, green chile chicken salad, et cetera.

If you see Hatch chiles at the market and want to give them a try, here’s a guide for roasting and storing. It’s easy, and green chile is delicious.

Last, but not least…

Larksome Goods is coming along nicely (if slowly), evolving in the way things do in an early stage. If I had that gadget Hermione Granger had that allowed her to be in two places at once, I’d have another blog just for this side project (see article above, ICYMI, “Keep Your Day Job, But Everyone Needs a Side Project“). But I don’t have that whatchamdoodle and can only be in one place at a time, so this little snippet will have to do for now. 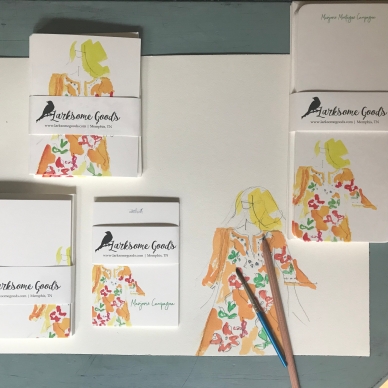 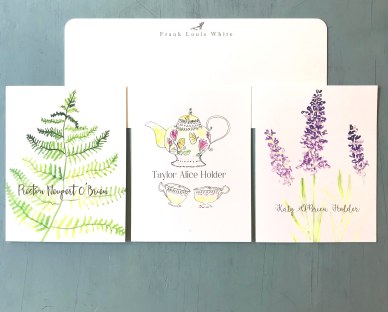 What’s been particularly fun for me has been doing custom illustrations for personalized cards – usually for gifts from one note-writing aficionado to another – and then having the personality in those illustrations resonate with others.

The line of plain cards is also evolving, and I’ve included some of my photos to round out the collection of drawings. (See, there’s my thumb – the one I drilled a hole in the last time I had an art show. Let’s hope that does not happen again.)

Why stationery? Because writing notes matters more today than ever. I promise you.

In fact, I’m going to go write one, right now. Maybe you’ll be the lucky recipient, who knows.

Morning after.
That’s a wrap. ❤️
I call this dress “The Sound of Music.” If you knew my mother, then you probably don’t need another word of backstory to understand the reference. But for everyone else, the story, as I know it (and who’s to say otherwise, because all the characters are now in the Great Beyond) is this: these curtains belonged to my great-grandmother on my father’s side. Nana had them in the house on Elzey, the one that was big enough to hold all of the then-grown Larkey children and their spouses and children for a little while during the Great Depression. Nana gave the curtains to her daughter who then gave them to my mother when a Christmas Eve fire in our attic left us displaced and my mother and sister (I was in college) moved into a short term rental house two doors down from my great aunt, who helped my mother furnish the rental. My mother gave the curtains to me when I bought my first house. I packed them into a zippered storage bag when I moved to Omaha and then toted them along for all the years that followed, right up until this winter when I was frantically searching for the box of French lace that I saved, from my mother’s sewing things, to make my daughter’s graduation dress. I still haven’t found that lace. The curtains, then, were at first a substitute for the original plan. They were plan B. My mother, the hand-sewing, piano teaching, enterprising writer, always had a plan B (and C, and D, and so on). My hand stitching isn’t as delicate as hers, but I think she’d approve. Who’s to say otherwise?
“Make it pretty on the inside,” that’s what my mama always said.
Tipsy Tumbler just arrived, so it’s a party now! Corner of Peabody and Belvedere (fenced lot - park on Belvedere). We’re here til 4!
%d bloggers like this: