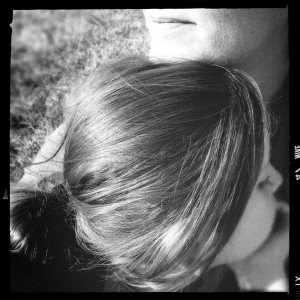 Last we were together (three weeks ago? four?), we were talking about seeing and being seen.

You are thinking, perhaps, that my memory is dodgy, that I’ve forgotten about the Frye boot story in between. What you don’t know is that I wrote the letter to The Frye Company at the end of February, weeks before I shared it with you. I didn’t know, in fact, that I was even going to share it.

But I’ve been busy (aren’t we all), and I couldn’t get any other post finished, and I had other things I wanted to do (#artharder, work, spend time with my children, go for long walks…), and I had that tale of dog and boot, carefully written and printed and signed and dispatched by FedEx directly to the Frye Company in New York, along with the half-eaten remains of my once-favorite footwear.

So, partly because I thought you might find the story entertaining, but mostly because I needed filler, I tidied up that letter and shared it as if it had been written just for you, expressly for the specific purpose of sharing here. Then I spent the rest of the weekend, and the weeks since, doing other things. Forgive me.

Now, here we are. It’s nice to see you again.

We should catch up on a few things, partly because after a few weeks off it’s going to take me a minute to get back, but mostly because the beauty of writing a blog is its wandering, rambling, unfinished, informal nature.

For several months this winter, I had a hard time getting interested in any book. Then in March I was determined to read Hillbilly Elegy because J.D. Vance was a speaker at a conference I planned to attend. So I read his memoir on the first hop of the plane ride. And then I remembered how much I enjoyed reading, and BAM! I downloaded another book that looked interesting for the second leg of the trip.

That second book, Exit West, is one of the best novels I’ve read in years. I enjoyed it so much that I reached the last page and went right back to page one to read a second time. Read this book. Do it now.

Next, Joan  Didion’s South and West caught my eye. It’s a collection of notes for essays she never finished, and the un-finished-ness of them makes the reading all that much more wonderful. If you want to know what the South is like, read that book. Seriously.  Even though it’s now 2017 and those notes were taken in 1970. I mean it.

Loaded down with serious thoughts, and bedridden with a cold, I needed a break. I switched to Where’d You Go, Bernadette?, which was fun and delightful and entertaining and required not a moment’s serious thought (except, possibly, for the tiny part about the main character’s going to Princeton but struggling to fulfill her creative promise).

Now I am reading A Really Big Lunch, a collection of essays by the magnificent Jim Harrison, published a year after his death. Jim Harrison and Donald Hall are two of my favorite writers, favored for their ability to take me places I would otherwise never see, notably to the view of women through a man’s eyes, and heart, and mind, etc. That I think of Hall whenever I think of Harrison (and vice versa) is probably peculiar to me, but the similarities are clear in my mind. If you are familiar with one but haven’t yet read anything by the other, then I encourage you to explore. My human predictive analysis suggests you might find something new that you’ll like.

If you know only Hall’s poetry (or don’t know of him at all), then read this essay, “Between Solitude and Loneliness.” If you know Harrison only for Legends of the Fall, then read this (long but rich) interview from The Paris Review  or this (much shorter) essay, “The Spirit of Wine“ (scroll to p. 5), part of Harrison’s gig writing for the Kermit Lynch newsletter.

And if you don’t click or read any of those suggestions, maybe you’ll at least visit splendidtable.org and listen to Melissa Clark’s interview with Mario Batali about his friendship with Harrison. Batali reads from Harrison’s essay “Father in Law,” and it’s a treat you should not miss.

I’m doing very little of it right now, and none on a regular basis.

But we had a surprise houseguest recently, a motorcycle-riding 23-year-old with thick, curly blonde hair and sunburned cheeks who served four years in the Marine Corps and is now touring for a year, with only the vaguest itinerary, before starting college. He’s going to Nova Scotia. He’s going to Argentina. He’s going to Alaska. I am green with envy.

The night he arrived I made kalpudding (Swedish meatloaf) with mashed potatoes and steamed green beans (for color). And the next day I made Garden & Gun‘s two-ingredient buttermilk biscuits. And the next day I harvested lettuce from my own front steps, but everyone wanted take-out pizza instead. And the next day I pulled guacamole from the freezer and opened a bag of Tostitos and pointed to the leftover Easter eggs in the refrigerator and went out on the porch to read.

In the weeks leading up to this visit, dinner fare ran the gamut from this lovely Persian Herb & Leek Frittata (fresh herbs held together with a bit of egg) to quesadillas with a side of Thin Mints. It’s hard out there for a mama.

Which brings me to my last update, for today: the bifurcated world of being a mother.

One of the things I have been thinking about, which I hope to turn into a post, although it’s simply not coming together neatly, is the cold reality that there is no third thing. I thought – mistakenly, foolishly – that I would have children, raise them, and then go on to do something else, something next. Before children; during children; after children.

Recently – only in the past year or so – I’ve recognized that there is only before motherhood, and motherhood. There is no third act. A single element becomes a fixed chemical compound, perhaps. Although maybe it’s not that, either. I’m still thinking about it.

And while I am thinking, I am remembering this wonderful piece by Phyllis Grant, a reader-writer-cook-yoga teacher-mama (who is apparently taking a break from writing dash and bella in order to work on her book and write for Food52). In late 2014/early 2015, Grant emailed friends and collected bits and pieces of different mamas. The post, “I KNOW A MAMA WHO,” is the resulting compilation.

…
I know a mama who hugged her son close when his father walked out the door without saying goodbye.
Backed out of the driveway with the car door open. Almost drove away from the gas pump with the nozzle in the car. Gives her 12-year-old daughter coffee to help make hard mornings smoother. Cannot get her kids to school on time. Looks like she has it all together.
I know a mama who feels nothing down there.
Is afraid she will hit one of her children. Is hoping menopause will come soon because the monthly cramps are unbearable. Feels wrinkly and gray, but when she talks at work, people fucking listen. Tries not to look in the mirror.
….
Phyllis Grant | Dash and Bella | February 2015

As for me, I know a mama who will write some more another day, maybe even this weekend. We shall see.