I am wearing a set of devices that I affectionately, without a trace of affection, call SPANX for teeth. If you are a man then this reference is possibly lost on you, though I suspect if you are one of the regulars here then you are the sort of man who has a woman friend who has clued you in on such things.

There are exactly three people, not including me, who were around in 1979 and who could both understand and explain to you why I might, at age 50, decide to get braces. Two of those people, my parents, are long dead. The third, my sister, would no more tell my story than I hers. Plus, although our five-year difference now seems insignificant, in 1979 she was eight turning nine, and I was 13 turning 14, and the gap was galactic. So I will have to tell the story myself, starting at the beginning.

In late spring 1979 I was 13. I had been to Italy, kissed a boy, read not only Valley of the Dolls but also Once is Not Enough, and had determined that New York was, ultimately, the place for me. In New York I would be a writer/painter/musician, all of which I was already, of course. In New York I would also be sophisticated, which I already very much was not.

I wasn’t conventionally pretty, then or now. But I was interesting looking, and while boys my own age mostly ignored me, grown men often took notice. I was tall-ish and shapely and looked much older than I was, enough so that when my father took me to lunch at The Knickerbocker one day we were seated in a dark booth toward the back of the restaurant because, my father explained to me later, the host apparently thought I was Daddy’s mistress and not his daughter. My father was mortified; I was thrilled.

The problem, or one of the problems, was my teeth. By 1979 our once-regular dentist visits had become less regular. In between less-than-regular visits, two of my permanent teeth came in on top of two baby teeth that stubbornly refused to fall out. For a little while I had four teeth where there should have been two, and then I finally had only the proper two teeth, though terribly out of sync with their companions.

One afternoon I overheard another mother saying to my mother, “I know this is none of my business, but you have got to take that child to the dentist.” So my mother, who was always assuring us and everyone else that everything was fine, fine, fine, took me to the dentist. The dentist looked at my teeth while my mother explained, in a very lucid-sounding explanation, how this had all come to be. And then the dentist, who knew perfectly well how this had all come to be, despite my mother’s explanation, looked at my mother, and looked at me, and then said to my mother, “I guess there isn’t any major problem with the bite. I think it’s mostly cosmetic. Maybe they’ll straighten out on their own, over time.”

From that day on, my story was that I didn’t really need braces, and so I chose not to get them. The end.

As I’ve gotten older, my crowded teeth have become a little more crowded, as can happen with age and time. I have a number of friends who’ve either wired-up or worn Invisalign at some period in their 40s, and I’ve told these friends, since the subject came up, that my teeth were never really crooked enough to need braces when I was younger, but they’ve moved a bit during my aging, and since my bite is now a little bit off, I might just have to get mine fixed, too.

Five weeks ago as we were getting ready for dinner, clearing the kitchen table of mail/purse/backpacks/newspapers (which always end up on the table, even though there are designated places, elsewhere, for all these things), my daughter noticed the neatly packaged box of aligners, delivered three weeks after my birthday, atop my pile of stuff. She asked what they were, and I told her. Then she asked why I was getting braces, and before I could answer Bernard said, “because Mama is vain and doesn’t like her crooked teeth,” which, for the record, is 100% true.

I opened my mouth to say, “yes, that’s true,” and then to tell the usual story, refined and shaped over the years, that I’ve been telling for a very long time. Instead, what tumbled out was this: “My father went bankrupt when I was your age, and my mother couldn’t afford braces even though I needed them.” And my daughter looked at me, and Bernard looked at me, and they both shrugged and said, “oh,” as if to say, “well that explains it.” And, after all these years of telling it differently, that was that.  What long seemed too heavy to unload suddenly fell out as easy as saying “2+3=5.” And then we just kept going, in our normal Wednesday night routine; and I thought to myself, “huh, that wasn’t so bad.”

One of parenting’s big revelations, therapists and counselors will tell you, comes from seeing child development through adult eyes. The reason we continue to joke about how “when I was your age I had to walk uphill both ways in the snow…” is because watching a child grow through each stage of life inevitably requires the parent to revisit being exactly that same age. From a different, older perspective, we get to see it all over again – skinned knees, first love, disappointments, peer pressure, ethical dilemmas, new discovery – all of it.

Counselors will also tell you that these junctures, to use a trite phrase, are pivot points. In these moments we, the parents, can help our children have different experiences from our own. We can help them make different choices, develop different behaviors. As a UT-Austin professor – one who’s spearheading their ACEs initiative – put it: we each pack our experiences and emotions into a suitcase, and we carry those suitcases around our entire lives. As parents, we walk into situations that allow us to turn from our own experiences and help our children pack differently.

If nothing else, 50 is an excellent age for taking inventory of one’s suitcase and its array of both gifts and secrets.

When I was the age my children are now, my mother taught me how to be self-protective, invincible, in control. My mother, a resilient woman if ever there was one, despised pity. Whether or not she read the poem, Mama believed that if children live with pity, they learn to feel sorry for themselves. Her solution for avoiding pity was to appear soft and ladylike on the outside while exposing no hint of true vulnerability. This feminine stoicism was the behavior she modeled for us, her daughters, until she died.

There is no doubt in my mind that the behavior I learned from my mother, layered on top of a native analytical inclination, helped my education and career (which, as an aside, did allow enough time in New York for me to reconsider that dream). I also have no doubt that this cultivated self-protection prevented me from falling into an unknown number of otherwise misfortunes. Only now do I wonder, though, what good things might also have come along if I hadn’t been quite so unwilling to share, if I hadn’t kept so many people so far at bay.

As I often tell my children, we don’t get to re-do “then;” all we have is now. What I have is a chance to behave differently, now. In the process perhaps I can help my children become strong and resilient but also, possibly, a bit more open, earlier in their lives. The world has enough lone wolves.

Recently I overheard my daughter talking to a friend about why I was so dressed up for a cross country meet. “Our family is different from other families,” she said. “My dad didn’t go to college, so my mom is the one who works.” And her friend shrugged, and said, “oh,” as if she’d just heard “2+3=5.”  And they started talking about something else, not as a diversion but because they’d easily moved on, maybe with a lighter suitcase in tow. 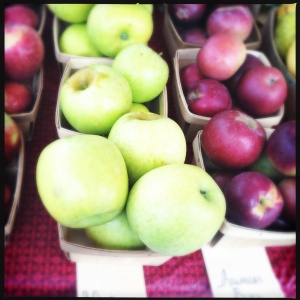 Butternut Squash Bisque
(1. no cinnamon; cream instead of half-and-half; 2. everyone else at my house will be having chicken strips and salad because they all hate butternut squash. Silly people.)