From the moment we master basic locomotive skills, we humans begin to pursue our independence and separate from our parents. It is as natural and ordinary and miraculous a process as any other in the animal kingdom – which is not to say that it is easy, for either child or parent.

No matter how many books, lectures, blogs or parenting classes contribute to decisions, the art of parenting is largely trial and error. No child-specific manual pops out with the baby. Some babies require extensive physical comfort while others will easily self-soothe. Some toddlers will cling and others climb. Some children will be content sitting in a corner, stacking blocks, while others will strip naked and run out the front door at the first opportunity. The work of growing up is hard; the work of parenting is even harder.

It is a child’s job to explore. It is a parent’s job to provide safe boundaries for child exploration, to give limits that provide a sense of security, not restriction. It’s rather an impossible assignment, parenting. I’d offer that, for those of us who choose it, parenting is also the last stage of our own growing up, the ultimate test of independence in the context of full interdependence.

The morning of the first day I put my infant daughter and toddler son in full-time child care I had a meeting with a professor who worked in community health. I remember apologizing for being distracted, explaining that I had, for the very first time, left my children in the hands of strangers who would keep them from 9:00 to 5:00 each day. This professor proceeded to tell me with great joy about doing that same thing herself, years earlier. She had been ecstatic, she recalled, to get back to her own life, thrilled to hand that baby over to someone else for a while. I was stunned and horrified that a woman – a mother, would even think such a thought and then have the audacity to say it aloud.

A little over a year later, after my mother died, I would recognize this feeling I had leaving my children at child care as homesick, a feeling of missing something essential, without which I was incomplete. Homesick was a feeling I had never experienced before in my life, not once. It was not a feeling I enjoyed, though it was only one of many feelings I didn’t enjoy in those months, when my children were little and my stress level was high and my job was unfulfilling and my life was, in almost every way, not remotely what I’d hoped it would be. I felt homesick every single day.

One morning I was in the shower and my son, who was then three, came into the bathroom and caused a scene that I can’t remember exactly, only that he was wild and animated and that I was in a hurry trying to get ready for work. Whatever he was doing, I didn’t have time or patience for it. At peak escalation point, draped in a towel, I turned to him and shook my hands up in the air and yelled, STOP IT STOP IT STOP IT!!! at the top of my lungs. He stared at me, wide-eyed for a few seconds before his face crumbled and he burst into tears and said: I want to go to Calvary; I want Miss Terri.

Of course he wanted Ms. Terri. Ms. Terri made him feel loved and happy and safe. I, on the other hand, was a completely shitty mother.

We put on our clothes; we drove downtown; I delivered my sweet boy to Ms. Terri’s room and then took my sweet daughter to Ms. Judy.

Ms. Judy, who was always perfectly groomed, usually with her hair in a freeze. Ms. Judy, who had been a teen mom and who was helping raise her teenage grandson. Ms. Judy, who in her late 30s had almost died from a stroke. Ms. Judy, who dressed the children in just their diapers at lunchtime on spaghetti day so they could go wild with plates of noodles and red sauce and still be fit for the ride home, later. Ms. Judy, my confessor, to whom I blubbered the tale of morning events. Ms. Judy, who said: let’s go see Ms. Susan.

Susan was the director of the child care center. When I tell people, now, still, that Calvary Place saved my family, what I mean is that Judy and Susan saved me, which in turn saved all of us.

What I needed to do, Susan suggested, just for a day, just to try it, was to bring the children downtown in their pajamas, as soon as we were all awake, before I got ready for work. Just throw on some sweats, load the children and their things (including clothes) in the car, and drop them off. Her idea was that I would – just for one day, just to try it – get the children to the center early enough that I could go back home to do whatever – go for a walk, take a longer shower, load the dishwasher – just for a few minutes, alone, before starting my work day in earnest.

I felt like an utter failure. I was supposed to be everything my children needed, all by myself. Being their mother was supposed to complete me. Somewhere along the way I had concocted the (false) idea that a good mother shouldn’t need anything outside the scope of motherhood, that motherhood should somehow be the magic final link in a perfect chain. No, I didn’t need to take my children to Calvary Place earlier in the day; I needed to stay home. That’s why I felt homesick; I was sure of it.

Except that I was wrong. I was, in truth, homesick for my old self. I had been accomplished in my own right, confident and successful and competent. As the mother of small children, responsible for little explorers I had no idea how to raise, I was homesick for the version of me who had disappeared.

Susan knew it. She also knew that, whether I worked or stayed at home, the only way to be a good mother was to be a woman equally solid on her own two feet, alone. Raising thriving children who could eventually become independent adults required an independence of its own on the part of their mother.

I had been raised to be independent, and fiercely so. It was a commitment my mother made and one she talked about often. She believed in the concept of roots and wings, and she wanted my sister and me to succeed in ways that she never had. My mother, however, did not ever fully reclaim her essential self after birthing my sister and me. As a result, I had the necessary training to become myself and the example of how to be a mother; but I didn’t have a role model for being both a fully independent woman AND a mother.

So the universe gave me Judy and Susan. I took my children to Calvary early the next morning, and then I went back home to shower and get ready, just for one day, just to try it. Then I did it again. The next week Susan mentioned that parents were invited to come to a class she was teaching at 6:00, that staff would stay to watch and feed the children. In the class she was going to go over positive discipline techniques, redirecting activities and the specific words they used when talking to children. She said: It’ll be short, and you probably know all of it already, but if you’ll stay then some other parents might too, and they might not know all the things you know.

She really was a genius, that Susan. She probably still is, even though she retired. When I wrote, not quite a year ago, about surviving the working mother battlefield, I somehow neglected to acknowledge Susan or Judy. Really, they deserve at least as much credit as any women I’ve known. In the dozen years since that fateful day of reckoning in Susan’s office, I can’t count how often I’ve used something I learned from her and Judy.

For the past month my children, now teenagers, have been at camp, doing things they would never be able to do here at home in the summer. This was the first time they were gone for a full month, instead of just a week or two. They were a little apprehensive about the longer time away but excited about the activities available only in the full-month sessions.

Their adventures this year, as in years past, were chronicled mostly through photos posted on the camp websites and, intermittently, through the handful of letters sent home, all spare in detail and obviously written with great haste. My people were too busy exploring to write long letters. They were finding the way to themselves, to the people they will become one day, not too long from now. Strong and independent and whole, I hope.

While they were at camp, I started a new job, able to jump in with gusto knowing my children were both safely in the hands of people who would care for them as for their own. Having worked as a teacher, marketer, PR agent, government policy advisor, start-up founder and, most recently, blood banker, I am venturing into new territory, serving as executive director of an agency that provides counseling, support services and classes for parents and children. The agency’s underlying philosophy is that there are no perfect parents, that all parents experience feelings of anger and frustration, and that all parents should be able to seek and find help without fear of judgment. Every time I read that philosophy statement I think of  Susan and Judy, closing the link in the chain.

My children are home now, and the weekend has been filled with their fantastic tales of discovery.  My son was at an all-boys camp, hiking and fishing and jumping off waterfalls. He came home with skinned knees and elbows, his voice an octave lower, his head an inch taller, a citizenship award in his hand. My daughter was at an all-girls camp, hiking and canoeing and wrangling snakes in the nature center. She came home with rosy cheeks, dozens of friendship bracelets, a head full of stories stories stories, and a team officer ribbon for her bulletin board.

Last night we had pizza for dinner (because nothing says “kids home from camp” like pizza for dinner), the two of them talking at warp speed, words on top of words, spilling details of exploits only hinted at in pictures and letters. After dinner we snuggled on the couch to watch The Truman Show, avoiding dreaded summer reading for one last day.

They are glad to be home but also clear about wanting to return to camp next summer, for at least the full month. They missed me, and I missed them. But they weren’t homesick for a minute. Happily, neither was I. 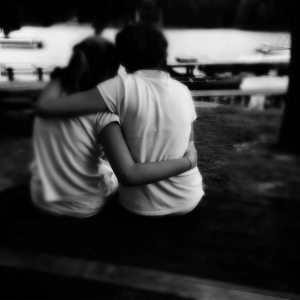