Did you ever ask Dad to help you learn how to ski?

We were in the car heading back toward home, my son and I, having driven all the way from our midtown home to the faraway suburban tennis center, site of a Thursday afternoon school match, only to be notified right as we were arriving, 35 minutes after leaving our driveway, that the match was canceled due to rain, even though the rain had passed and the sun was out and the courts were barely damp.

The kids on the other team had things to do tonight, our coach said, and so they couldn’t wait around for the courts to dry.

The original plan, for which I had left work early, had been to drive from home to the 4:00 tennis match, watch my son play and then drive, the two of us together, to the school where my daughter’s track meet was being held, watch her run the 1600 meter race, which typically happened about 40 minutes into the 5:00 meet, and then head home, the three of us together, to join Bernard for dinner. The timing was tight but workable – just so, the way most of this middle school logistics business tends to be.

But now we were course-correcting. I would drive the boy 35 minutes back home and then turn around to get to the track meet where my daughter was warming up, because it was only 3:50, too early for me to arrive at the meet, according to my daughter. There was also a previously undisclosed matter of my son’s Friday math and science tests for which he hadn’t started studying.

And so we were in the car for another half an hour and change, just the two of us, my son and I, driving back home, talking about nothing much, which is my very favorite part of driving around with my children, one-on-one.

Did you ever ask Dad to help you learn how to ski?  he asked, apropos of nothing.

My inability to ski is a subject of regular, though intermittent, discussion in our house. Of all the oddities in our odd family, this is the one my children find most perplexing. I suspect he was thinking of it because we had been, the night before, talking about how much we wished Bernard played tennis, so the four of us could play tennis together.

Once, long ago, when I was a year or so younger than my daughter is now, I actually had grand plans to be both an Olympic skier like Jill Kinmont, and a Wimbledon-winning tennis player like Chris Evert. I would be a world-class, dual-sport athlete who would somehow magically look like a cross between Farrah Fawcett and Lindsay Wagner, because it was 1976 and that four-woman composite represented every single thing I ever hoped to become.

We lived in Memphis, Tennessee, where it was very hot from April to October, and I did not like to get sweaty, so I had little or no chance of following in Chris Evert’s footsteps, even had I been so fortunate as to have the required athletic ability. I faltered after two or three hot, sweaty tennis lessons, not picking up a racquet again until I was 25 years old.

Also, we lived in Memphis, Tennessee, where it almost never, ever snowed, not even in January, and the highest elevation was somewhere just short of 400 feet above sea level, and my parents were very much not the ski chalet sort of people. I didn’t venture anywhere near a ski area until senior year of high school when I used babysitting money to spring for a Young Life ski trip adventure to Breckenridge and awkwardly pointed my clumsy toes into a snow plow, with the idea of being a world-class skier still vivid in my mind, though without any of the requisite natural talent.

A dozen years later, on a business trip to Park City, having never abandoned my Other-Side-of-the-Mountain dreams, I decided to give skiing another try, bolstered by encouragement from a friend, a former ski instructor, who said things like: go for it! the snow is deep! the landings are soft!

I booked a half-day private instruction with a woman who’d moved to Park City from L.A. to marry the man of her dreams, a man who happened to be Mormon. Her new life in Park City, replete with new undergarments, was a bit of a departure from the old, which she described in detail as we rode the lifts, first up green slopes then graduating to blue. Golden thread. Face downhill. You’ll be fine. These are the things she said as she traded me in for her afternoon client, leaving me to fend for myself, toes in an only slightly more confident snow plow position, but fully comfortable getting off the lifts, again and again, until they closed.

Feeling renewed and exuberant, as if I’d crossed to a new level of achievement, I sauntered down to have a beer before heading to return my gear in the rental shop, feeling as swank and confident and athletic as ever, wishing I could stay another day to hit the slopes. I sat outside at a cafe table, goggles perched on my head like a real skier, enjoying the setting sun and the faint muscle aches, oblivious to occasional stares in my direction.

Oh, honey, didn’t anyone tell you to wear waterproof mascara? That’s what the girl at the rental return counter said, eyes full of pity as she checked off my boots and poles and 150 skis. A quick trip to the restroom confirmed the report. In my mind I felt ready for Gstaad; in reality I looked like a distant third cousin who Jed Clampett had left behind when he moved to Beverly Hills.

When I say that I don’t know whether or not I was honest with Bernard, when I met him a year or so after my trip to Park City, about my skiing abilities, what I mean is that I’m certain I was not remotely honest at all, not one tiny bit. Why yes, I love skiing, let’s all go! is what I said. And so we did, Bernard and I and my sister and my sister’s husband, the four of us together, out to Teton Village, over to Grand Targhee, back out to Teton Village, over and over again, starting that first winter, 20+ years ago, when I abandoned my house in Memphis, loaded my dog and warm clothes into my ailing Saab and headed to Jackson to chase a boy.

My sister, who at that point had even less experience on skis than I, was fearless, eager to hurtle herself downhill at break-neck speed, until she realized that breaking her neck was a not-too-distant possibility and decided that we, she and I, should stick to the South Pass Traverse, where we could ski just fine thank you very much, while the boys headed up to Rendezvous Bowl.

Watching Bernard glide down any hill he pleased, natural as a gazelle running on an open savanna, it all looked so easy, so effortless. Just not for me; not ever. My imagination was willing; my body was not.

Bernard, to his credit, did try to help, mostly by suggesting that I take lessons and perhaps be a little less hard-headed. On one of our last trips to Jackson, before we settled – unexpectedly – in Memphis, Bernard, determined that I could conquer those powdery trails, paired me with our friend Big Don, starting at the top of Gros Ventre, hoping a new coach could coax my  stubborn pigeon toes into graceful parallel turns. After an eternity of excruciating, slow, stiff, maneuvering, that kind and patient man finally said: you’re going to have to let your feet leave the ground if you really want to learn how to ski.

And I said: I’m not really the ‘feet leave the ground’ type.

And he said: Ok, but I’m just not sure Bernard is ever going to marry a girl who can’t ski, and if you want to learn to ski, you’re going to have to let your feet leave the ground. 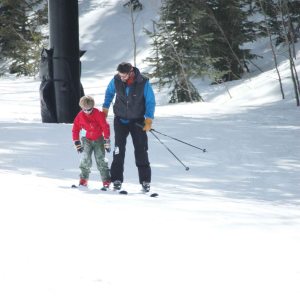 Not too many years later Bernard had, in fact, married a girl who couldn’t ski, a girl who planned and organized and set routines and had in her mind a very specific way that things in life were supposed to be. We were visiting Santa Fe with our 18 month old son and news that a baby girl was on the way. From the back of the house, Bernard’s growing-up house where she still lives, Bernard’s mother brought out a small pair of bright orange skis that had once belonged to Bernard’s younger brother when he was not quite two years old. Bernard was a slow learner, she said, and didn’t learn how to ski until he was three; our son shouldn’t wait that long.

And so Bernard took our son down the tiny bunny slope, while I watched from the deck and took pictures.

Both of our children, first our son and later our daughter, have been skiing since they were toddlers. They are, in fact, more comfortable on skis than on bicycles, despite the fact that we live in a climate and terrain more suitable for bicycles than skis. Skiing is the thing they do with their crazy, unorthodox father. They ski; and if I’m with them, I watch them ski, and I take pictures, and I enjoy being outside in the clear mountain air, not skiing.

But what they want is for all of us to be skiing, together, like a picture in a travel brochure. What they want is a mother who can relax and go with the flow and glide down the hills where the snow is deep and the landings are soft. They want, in just this one way, a mother who I am not.

Yes, Daddy tried very hard, actually, to teach me how to ski. I just never could get the hang of it. You know the snow plow, where your toes point together and your skis are in a wedge? That’s all I can do. That’s it. I can’t get my skis together, side by side, the way you can.

And my son says:

Oh, so that’s the problem? That’s why you don’t like skiing? But Mom, it’s super easy; all you have to do is let go.