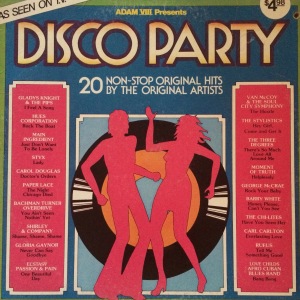 Here is something awesome: there are people in my life who love me despite the fact that they know incredibly embarrassing things about me, like this thing I’m about to tell you.

When I was in sixth grade, I wanted to change my name, legally, to Jamie Sommers. I even asked my mother how much it would cost for a name change and whether or not I could hire a lawyer to help me, even though I wasn’t an adult. Also, I started signing my name “Jamie,” instead of “Jennifer,” on things like the covers of my record albums, which is how some of my grown-up, right-now friends discovered my secret.

Last year when I was clearing out the storage room full of stuff from my mother’s house, I had boxes and boxes of vinyl up for grabs. In those boxes The Cure, The Smiths and Dire Straits co-habitated with Billy Joel, Barbara Streisand, and Leo Sayer (nope, not making that up). Some of the album covers were marked “Larkey” in my college-era scrawl, and some were marked “Jamie,” in my middle-school-era scrawl. I suspect you can guess which were which.

And so a friend who was going through the boxes, pilfering for some Human League, asked me who “Jamie” was, and I told the true story on myself. Why the hell not. I am too old not to be the real me.

You are wondering, if you were not a TV watcher in 1976-1978, just exactly who Jamie Sommers was. Well, once upon a time, a long time ago, in the decade of both appalling fashion and questionable architecture, there was this TV show called The Bionic Woman, starring Lindsay Wagner (yes, the Sleep Number bed spokeswoman). The lead character, whose name was Jamie Sommers, was smart and resourceful and pretty and resilient, despite being a bit damaged. Also, she was a secret agent. I wanted to be her when I grew up, because I had outgrown wanting to be Nancy Drew.

Here is something else awesome: my mother never blinked an eye over any of this. She never said that it was stupid to want to be a fictional character or that it was ridiculous to ask about changing my name. She understood that this was all a natural phase. Despite not having a formal education in child development, my mother did enough reading and research to know that a child’s ability to play-act scenarios, to pretend to be someone else (hopefully someone with admirable character traits), was a vital part of growing up.

But, to be clear, she was swift to say that she didn’t like the way I acted when I came home from being with so-and-so, quick to point out when I wasn’t acting like myself, the person she knew me to be. Adopting mannerisms of a fictional character who helped people and solved problems and stood up for what was right was ok. Adopting mannerisms of real-life peers who were mean and gossipy was not. You’re better than that, were my mother’s exact words. As I have written many times, I had a wonderful mother.

And now I get to see this entire string of scenes play out from the other side, as my children navigate through their middle school and teen years. They are not as nerdy (strange) as their mother. Neither of them, as far as I can tell, has written a fake name in the cover of a book. But my daughter and her BFF do say that they are Mary Kate and Ashley when they go to Pyro’s Pizza and place an order. And no, I’m not making that up. And yes, I very much wish they were watching reruns of The Bionic Woman instead of Full House.

But their dreams are theirs, not mine. My job is to be understanding, to help them nurture their true souls and develop their own voices. I’ll say simply that it is harder than my mother made it appear. I am trying my best. I do often wish my mother were still here to help me in this mothering; but she isn’t.

I’ve realized recently, though, that I have an alternative resource: my career experience.

This is the part where we go back to the elevator, where we were last week.

As a refresher, in summary:

Shortly after I moved back to Memphis from Omaha in early 1999, I had lunch with a young woman who worked in the secretarial pool for the executive suites where I rented an office. This young woman was interested in public relations work, and I was happy to talk about it. On the way back to our office, we ended up in a crowded elevator with a man I actively avoided, a man who had once been my boss and who was an absolute bully.

And Awful Man said: I think it’s very rude that you don’t say ‘hello’ to me when we pass in the lobby.

And I somehow replied: Given how you treated me, you should be thankful I have the good manners not to speak to you at all.

And then, when we got off the elevator, my lunch companion said, to me: When I grow up, I want to be you.

And I said: I seriously think I am about to vomit.

My hands were clammy, and my knees were shaky, and I felt lightheaded, and I was pretty sure I was going to be sick. I was 34 years old, and it was the first time I had ever, in my entire life, spoken up for myself in that way. I remember it as clearly as if it happened yesterday.

I would love to tell you that having once found my voice transformed me instantly from the cowardly to the courageous lion. It was, instead, the first step in a proverbial thousand mile journey. I am still on that journey; it is a life’s work.

But speaking up, standing up to bullies, did slowly get easier after that particular day. Now, for better or worse, it is my normal way of being. I am outspoken and direct to a degree that is not always comfortable and that is sometimes even unhelpful. Sometimes, though very rarely, I still feel shaky and lightheaded and queasy. Again, it is a long journey.

There are stretches of the journey that we each must walk alone. Internalizing your vision of the future – whether you’re 12 or at 50 – is a solitary part of the pursuit. Ditto the decision to claim your true voice. Only I can decide what I want to be when I grow up; only you can do the same for yourself.

But we can help each other with clues and ideas and support. Those who are ahead on the road can set examples for those a few steps, or miles, or years, behind. Sometimes the people up ahead are real and can provide real advice and counsel, as well as modeling real behavior. Sometimes they are merely inspiration – characters in books, movies and TV shows who can help build a mental picture.

What my young colleague really meant, years ago, was not that she literally wanted to grow up to be me, but rather that she wanted to learn how to speak up, to be the grown-up version of herself. She wanted to develop her own words, find her own voice.

I know that’s what she meant because we worked together for almost four years, moving from the executive suites into first a two-person office and then a five-person firm. Although she was not the first person in my career who reported to me, she was the first person who looked to me for coaching – both in life and in work. In retrospect, I’m pretty sure I often made a muddle of it. But I tried, and I learned; and she tried, and she learned; and we both matured in the process.

Then we both moved on to other things and lost touch. I wonder if she stayed in public relations; I hope she is at ease speaking up for herself.

I’ve thought of her often, particularly in the past seven years when my work has paired me both with a coach to help refine my voice and with colleagues, mostly women, mostly younger, who have an idea of who they want to be but need help finding their own words. It has been, to date, the most rewarding and fun and humbling part of my almost-30-year career. I still often make a muddle of it; but I love it, each and every day.

Last week, in a blinding glimpse of the obvious, I realized that this skill I’ve been honing at work is exactly, precisely what my children need from me as they plod through pre-teen and teen adventures. They want to try on different personalities as they become who they are. They need me to help listen for the things that warp their real voices and the things that help them ring true.

And if, in the process, “Mary Kate” is written on the Pryo’s box, then so be it. It is the start of life’s long work, new voices coming up the road behind me. Better, stronger, faster.

I am wishing I had not skipped Plated delivery again this week…. But I did, so here’s what we’re (possibly) having, although scrambled eggs and toast may find their way to the table instead. Also I am hoping the warmer weather means lettuce will be here soon, so the picture is wishful thinking.