The cat lives upstairs, in a three-compartment suite comprised of two bedrooms and a bathroom. The bedrooms each have human-sized beds, and the bathroom has two small cat-sized beds that formerly belonged to Build-a-Bear creations and now belong to the cat. All three rooms have sunny windows and secret hiding places and the comings-and-goings of puberty-aged children and the occasional excitement, when the weather changes, of a jumping spider or cricket or cockroach from the fireplace, drawn irresistibly to crumbs on the plate that my teenage son forgot to take back to the kitchen.

On the one hand, you could see this situation as a cat-version Waldorf penthouse, replete with every amenity, including room service. But on the other hand you could see it as the Tower of London, though without the looming threat of execution. All of life depends upon your perspective, even for cats.

Though she has always been a refugee, the cat’s exile has not always included restricted roaming ground. Once upon a time she was free to eat the asparagus fern in the living room and claw the furniture and follow sunny spots from window to window as the days progressed. In those salad days she shared the house with three cat-seasoned dogs who took one look at her, yawned, and went back to sleep. That was then; this is now.

Stella (that is her name) came to our house by surprise. One afternoon my step-sister-in-law called to say that she’d found a tiny black kitten in her yard, and that her cats did not like this kitten, and that her Scottish terriers liked the kitten even less, and that the poor kitten’s mother had probably been hit by a car or eaten by coyote, and wouldn’t we please consider having this kitten as a pet, couldn’t she just bring the tiny thing for us to look at.

And I said, trying to be polite, that I would think about it because I was on my way home from picking up the children at school, and that of course I would have to talk to Bernard, and that surely Penny remembered that we had three dogs didn’t she (of course she did), and that one day when it was convenient for both of us certainly she could bring the tiny thing over. And Penny laughed and said OK, because what Penny knew that I did not know was that she was calling from my driveway.

So I pulled into our driveway and shrieks of oh Mama, oh Mama, Aunt Penny brought us a kitty cat! erupted, and so we got a cat. An itty-bitty tiny black cat that fit into the palm of my husband’s giant paw.

Bernard wanted to name her T.C. because she was, in fact, a tiny cat, and, he suggested, she was a street cat and needed an ironic street name, preferably initials. 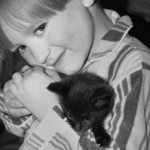 Well I’m going to call her Stella, was all my son had to say, and we thought that was a very sophisticated name for a five-year-old boy to select, and so it was agreed. A month later I would learn, at a sleepover drop-off, that my son’s friend Vito had a new baby sister and that the baby sister’s name was Stella, after the beer. When I whispered to ask if the cat had been named for Vito’s baby sister, my son beamed with pride.

I would love to tell you that Stella Cat mourned her original canine companions when, one by one over the course of three years, they crossed the rainbow bridge. But she is not that kind of cat. In fact she is stereotypically aloof and terrible, but she is very pretty and mostly, at least in her old age, sweet to my children. Also, she is resilient, a quality I respect and admire in any living creature, even one that occasionally regurgitates hairballs.

When the chocolate Labs, the first arrivals in our current pack of dogs, came into the house, they announced themselves by giving Stella chase and leaving her with a hole in her flank, an unexpected turn of events.  Thus began her sequester. Doors were rigged to afford cat-sized access only, no dogs.  Stella would peer cautiously from one of the openings, judge the path clear and then race down the stairs to safe haven  on top of the dryer, by the back door. She would then go outside and prowl at her leisure, usually disappearing for 24 hours or so, long enough to remind us that ours was a residence of choice, not requirement.

As she has gotten older, saggy belly swinging when she walks, she seems to find greater satisfaction from her indoor living arrangements, preferring a child’s drool-covered pillow to the cobwebbed shelf by the leaf blower. She eventually befriended one of the Labs, the male, who often seeks out her company, calling on her in her quarters and letting her walk around his legs and purr while he wags his tail. He is her plaything; he will forget all about her when he rejoins the others of his kind. She does not care; she is not that kind of cat.

It’s possible you are thinking that a cat story was not at all what you expected to read here today, possible you are surprised to learn that there is even a cat in my house, a house marked clearly as dog territory and we as dog people. Every now and then it’s a good idea, I think, to mix things up a bit and wander outside the lane markers. All of life depends upon one’s perspective, even for cats, especially for humans.