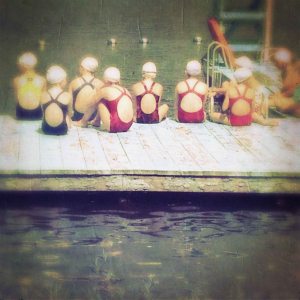 My mother wanted to name me Guinevere, but my father would not have it.

Mama was convinced that her family was descended from a line of Celtic royalty, that something had gone terribly amiss, and that it was her destiny to research and reclaim their heritage. I am exaggerating only very slightly. And I exaggerate not all her desire to give me the proper name of the famous Celtic queen. This quirky obsession was part of my mother’s charm, and her knowledge of Arthurian legend and Celtic history generally were considerable.

But Guinevere was a no-go, so they compromised on Jennifer, the modern adaptation of Guinevere and a name my mother hoped would not become too common.

In 1966, the year after I was born, the name Jennifer jumped into the top 10 most popular names for girls in the U.S. Since I was still a baby, my mother suggested to my father that perhaps my middle name, Scott, would be more useful for me in case I ever wanted to write a book or get a job or buy a house or do anything for which a woman’s name on the application might be a disadvantage. But I was already my father’s little J-bird, so Jennifer it was.

Then, BAM, in 1970 came Love Story, and all Jennifer hell broke loose. “At least they’ll all be younger than you,” my mother sighed, the memory of being surrounded by fellow kindergarten Bettys still fresh in her mind.

For 15 years, 1970 through 1984, Jennifer was the most popular name for girls born in the U.S., a reign second only to Mary’s in the 20th century. Since I was born five years ahead of the crowning, there was only one other Jennifer in my first grade class, a few in the grades ahead of us, and a good number that came up behind our advance through elementary school. In my grade there was also Jenny, whose real name was (is) Martha; but that’s a different matter entirely.

Through high school, college and my early 20s I was always on the lookout for fellow Jennifers, expecting to find one on every street corner but never meeting the wave my mother predicted. And even through that 15 year run, our name atop every name list, you could feel Emily and Madison and Jessica coming up fast right behind us.

Maybe I’m reading into it things that aren’t there, maybe it’s my iteration of my mother’s Celtic quest, but I feel a bit of magic solidarity whenever I encounter a sister Jennifer, or Jen or Jenny. I watch young Jennifer Lawrence take the media to task and think, “Yeah, that’s a Jennifer. Do not mess with us.” I read Jen Groeber’s great mama art blog and cherish that new, but strangely familiar branch on the Jennifer family tree. We were a blip, we Jennifers, but maybe one that will leave a good mark.

In celebration of Jennifers everywhere, this week’s dinners will all come from Jenny Rosenstrach’s Dinner: a Love Story, which a friend first shared with me a few weeks after I started posting weekly menus in January 2013. “Do you read DALS?” my friend sent by text. “What’s DALS?” I responded, and we went from there (proving, perhaps, that Jennifers really do all swim along a common current). Anyway, DALS often has recipes with ingredients we just don’t eat (kale), and sometimes the difference between a New York kitchen and a Southern kitchen are glaringly apparent to me. But I enjoy reading Jenny’s posts, and I am confident that the recipes are both a) her own, and b) well-tested. So here’s a sampling, taken from her What to Cook Tonight page; if you don’t like the five I’ve selected, I promise there are plenty more.

Waffle Iron Grilled Cheese (come on, you know you want to, no matter how old you are)

10 thoughts on “On being a Jennifer.”