Sometimes it’s hard for me to believe in God.

And before you run off worrying that I’m about to go all come-to-Jesus on you, understand that I long ago decided to believe what I believe, relinquishing any desire to control what you or anyone else might choose to believe. You’ve got yours; I’ve got mine. One day one of us is in for a big surprise, and neither of us will be able to spoil it for the people we leave behind.

But just when I think that thought, something happens to give me pause; and that’s the story I have for you today. You can read it or not and believe it or not, but I swear to you it’s true, even if it’s sort of a silly story. And if, like me, you’re generally a believer in a higher good but sometimes you wonder if we’re just masses of atoms moving aimlessly through space, then maybe this story will at least give you a feeling of companionship.

(And if you’re just here for the dinner ideas, this week we’re having homemade pizza, cheese soufflé, chili, a butternut squash pasta dish, and tortilla soup. Go ahead, skip down; I won’t judge.)

As a teenager, like so many other teenagers then and now, I wanted to save the world. Through the years of high school and college and teaching art to middle schoolers I kept waiting for the sign of what I was supposed to do to save the world, because I’m generally a believer that the Architect provides signs. But the sign never came, and so I ended up in marketing.

One day when I was busy not saving the world but instead promoting satellite communications, a man came to our office and gave a great speech about how we – meaning the 20-somethings I worked with and I – needed to give blood because our parents were at the stage in life that they were going to need it, and since our parents had done so much to get us to the point of having these jobs and apartments and cars, we owed them. And so I marched out to the bloodmobile and gave blood.

Eight weeks later the blood center called me and told me I was eligible to give again, so I went back. Eight weeks later, the same routine. In February 1991 I gave my eighth pint of blood, making my total a gallon, and they took my picture and gave me extra cookies and told me I was a hero. So I kept going back, every eight weeks, because having someone tell you you’re a hero and that you’re saving the world makes you feel pretty special, special enough to hang on to a Polaroid snapshot of yourself wearing bad early 1990s glasses but looking oh-so-trim in your 25 year old body.

Then I moved, and I moved again, and a third time, all in the course of five or six years. And during that time I probably would have continued to donate blood except for one thing: no one asked me, so I didn’t give it another thought.

We were walking the dogs around the lake at a local Memphis park, Bernard and I, back in the summer of 2001, and we met a man with a Weimaraner named Sophie who liked to chase tennis balls as much as my dog Ella did; so we and the Weimaraner and the man became walking buddies.

We were walking the dogs one day, exchanging pleasantries and talking about what we did for work, when the man said he worked at Lifeblood, the local community blood center. And as soon as he said it, I knew I was going to work there. If you’ve had this experience, then you know what I mean. If you haven’t, then I’m sure it sounds ridiculous and no amount of explaining will make it sound otherwise.

Six years later I was raising money for an early childhood literacy program, and our fundraising consultant introduced me to his friend, an experienced fundraiser who was raising money and managing marketing for the blood center. We had lunch to talk about fundraising strategies for early literacy, and at the end of lunch she said I didn’t need to be soliciting money for books; I needed to work at the blood center and ask donors to save lives. “Yeah,” I thought, “I know.”

So for seven years now I’ve worked at the local community blood center, raising money and recruiting donors and trying to help save the world, one pint at a time, just as I knew I would.

Sometimes I feel like I’ve actually made a difference. Sometimes I feel I’ve had a good idea or helped move a project along or engaged a group that wouldn’t otherwise give. The victories are awesome and humbling: the donor who will drop everything, hire a babysitter and come donate for a critical patient; the staff who will stay late or come in at midnight to get the work done; the patients and families who tell stories about what it means to be alive because some stranger gave blood and other strangers got it to the hospital. On the good days, it’s pretty incredible work.

Other times, like several weeks ago, I’ve felt like I have accomplished nothing. Working at a community blood center is hard, really hard, and there’s never, ever a finish line. There’s never enough blood, there are always issues with staff or regulatory compliance, hospital cost-cutting has shifted the emphasis from mission to money, and despite all the super creative gimmicks we come up with the marketing message is exactly the same, day after day, year after year.

While I was in that dark corner, sure I’d wasted the best years of my career, certain there was no grand plan after all, I decided to donate platelets because at least I could do that, and since platelets have only a five day shelf life, there are always patients who need them, all year long.

Platelet donation, if you’ve never tried it, is about a 2 hour procedure. I was using the still, quiet time to reflect on my irrelevance, the lack of impact I’ve had in this work I’d been certain I was meant to do. As I stared out the window, I saw a van pull up.

“I think that’s Action News 5,” one of the nurses said.

Yeah, I thought, they’re probably going next door to Firestone to get their tire fixed.

A few minutes later one of the reporters from our NBC affiliate walked in and said to the nurse at the desk:

“I wonder if you can help me. We had a call from a family whose baby is in critical condition and needs blood, and I know we’re supposed to call ahead and get approval from the PR people, but the family said it was urgent, so I came straight here, and I wonder if you have any donors who could talk on camera and if you could call your PR folks and get it cleared for me to interview them.”

“Well isn’t it your lucky day,” the nurse said, ” ’cause that’s our boss there in the chair giving platelets, and since she’s the one who’ll have to approve the interview and she’s the only donor in the center right now, I bet she’d be glad to help you.” 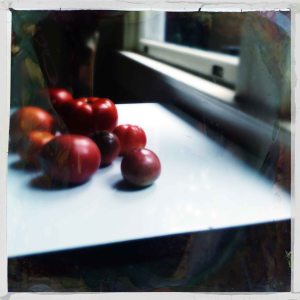 Both of my young people have braces now, so dinner is a bit more of a challenge than it was. I can either prepare two dinners, one for adults and one for children, or I can try to make things that everyone can eat. Last week the adults had a variety of salads, and the kids had yogurt, ice cream and scrambled eggs. This week I’ll try to suit all four of us, making homemade pizza, cheese soufflé, Texas chili, a butternut squash pasta dish, and tortilla soup that has become a standard favorite.

Yes, you can make pizza from scratch on a work/school night. The trick is to get the dough started the minute you get home, as it needs to rise for an hour. I make dough in a stand mixer: 1 oz. yeast (1 packet or 2 1/2 tsp.), 1 cup warm water, a pinch of sugar, 1 Tbsp. kosher salt, 1 Tbsp. olive oil, and 3 cups flour. I proof the yeast first (yeast, water, sugar), then add the flour, oil and salt (flour 1/4 cup at a time) while the mixer is running (dough hook attachment). It takes about 5 minutes, start to finish. Then I coat the ball of dough in a generous amount of olive oil and let it sit, covered with a dish towel, in a warm place for an hour. Punch it down, split it into two balls, and roll it into two thin 12-14″disks (or you could make smaller, fatter rounds; we prefer thin crust). Preheat the oven to 450 degrees while you top the rounds with whatever suits you. I make one plain tomato sauce/cheese pizza for the children and one more exotic (this week it will probably be roasted heirloom tomatoes with goat cheese and basil). I cook the pizzas on baking sheets that are lined with Silpat mats. I turn the oven down to 400 degrees as soon as I put the pizzas in. Serve with some fresh fruit or a green salad.

Cheese soufflé was one of my mother’s kitchen basics, and this tasty dish is much easier to make than anyone thinks. There are plenty of recipes online if you want more specifics, but I make it the way my mother did and it works every time. Preheat oven to 400 degrees. Butter a soufflé dish and coat with grated cheese (Parmesan works well). Make a white sauce: 3 Tablespoons butter, 3 Tablespoons of flour (melt butter; stir in flour to make a roux), 1 1/2 cups hot milk (whisk hot milk into roux to make sauce). Remove sauce from heat and stir in 6 ounces cheese, grated or cubed (Gruyere is the standard; I use whatever we have, which is often just cheddar). Separate 5 eggs. Stir a couple of spoonfuls of the cheese sauce into the yolks to warm them up, then add warmed yolks into saucepan and whisk well. Season with salt, and a bit of cayenne pepper. Beat eggs whites until stiff. Add half of the whites to the cheese base and mix well. Fold in the other half of the whites (you’ll see egg white showing), then transfer to souffle dish. Put it in the oven and reduce heat to 375/380 degrees. Cook for about 30 minutes. 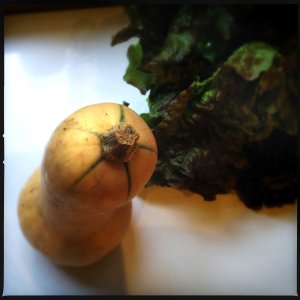 I love butternut squash, and one day I hope my family will, too. Maybe if I mix it into other things they like, it will work. If time permits, probably on a weekend day, I’ll try this new recipe for butternut squash gnocchi; if not, then I’ll try this one for orecchiette with squash and chiles (I will use dried orecchiette, and I will leave out the hazelnuts – may substitute roasted pumpkin seeds).

We’re partial to New Mexico style red chile pork (carne adovada), as you probably know by know; but my children prefer more traditional chili con carne made with ground beef (or turkey), kidney beans and chili powder. I have yet to find a perfect recipe for this type of chili, but this one from the Food Network Kitchen has proven family-friendly and easily adapted to adults who prefer more spice (just add more chipotle pepper/sauce). I serve with lots of lime, chopped white onion and cilantro, things everyone in my family enjoys.

I found this recipe last year and have made it many times now. It is delicious prepared exactly as written, which is saying a lot.