A few things you may not know about Lou Gehrig:

As my friend Stan would say, Gehrig could hit the snot out of a baseball.

I’ve been thinking about Lou Gehrig as I’ve watched countless friends, children of friends and acquaintances try to sit still through an ice bucket dump. I’ve been thinking about Lou Gehrig the man, the ballplayer. Sometimes I wonder if people today would even know Gehrig’s name had he not developed amyotrophic lateral sclerosis (ALS), the rare and horrible neurodegenerative disease that ended his career, took his life and then adopted his name.

Gehrig, dubbed the Iron Horse, spent the first half of his career in the shadow of Babe Ruth, the second in the shadow of Joe DiMaggio. Ruth and DiMaggio were big personalities, larger than life sports icons. Gehrig, in contrast, was the guy who showed up every day, did his job (really, really well), and went home. He was, by all accounts, a consummate gentleman and good sport – one whose name is familiar these days mostly because of the disease that killed him.

Google “Babe Ruth quotes” and you’ll find plenty, including “I didn’t mean to hit the umpire with the dirt, but I did mean to hit that bastard in the stands.”

Search “Lou Gehrig quotes” and you’ll find few, mostly taken from his July 4, 1939 farewell address in which he said he was the luckiest man on the face of the earth.

Look at these grand men. Which of you wouldn’t consider it the highlight of his career just to associate with them for even one day? Sure, I’m lucky.

The first few ALS ice bucket challenge videos were hilarious to me (and, yes, they also made me think “why didn’t WE think of doing this to challenge people to donate blood?!”). My favorite video was my friend Nicolle’s, because Nicolle’s teenage son used the iPhone slo-mo to capture the stunning impact of freezing water. Completely hilarious.

I watched, I laughed. And I prayed that the fad would fade before someone challenged me. I’m not above a good gimmick, but I am quick to tire of them. This one, I reckoned, would soon grow old or take a turn toward parody.

And it did. But the traction lost among jaded adults was gained among kids, who changed the game and expanded it. Seriously, what could be funnier than dumping freezing water over your kid friends’ heads, taking videos and posting them on Instagram?

What could be funnier? Well, parents. Parents could be funnier. Whose mom or dad will be the clown in the tank? Whose parents will get soaked through to their underpants, on camera, and then walk home with everyone watching?

“Hey, Mama! You’ve been challenged!” my triumphant daughter announced, one Sunday evening around 5:30.

“You know, the purpose of this challenge is actually to raise money, not make videos. Do you know why you’re doing this? Do you even know who Lou Gehrig was?”

Yes, that’s what I said. And then I added, “Besides, it’s almost dinner time, and it’s a school night.”

Daughter, pleading: “Come on, Mom! All the girls want YOU to do the challenge!”

Me, cranky: “I am not doing the challenge. I will write the check. Are the girls collecting money? You know the goal here is really to raise money for disease research.”

“Come on, Mama. Please? So-and-so, and so-and-so (other parents) are doing it. Won’t you at least come down there with me? Please?”

I got dinner to a holding place, took off my apron and walked (arms folded) down the block to the neighbor’s yard. The girls were giddy with excitement. Ahead of me (or what they hoped would be me) was a lawyer dad whom all the kids adored.

You choose how you feel, I say at least once a week to my children at home or my “children” at work. You can choose happy or unhappy, lucky or unlucky. Sure, circumstances beyond your control can make it easier to choose one over the other; but in the end it’s still your choice. You choose to be a good sport or not.

2130 consecutive games punctuated by a speech declaring himself the luckiest man on the face of the earth despite the fact that he was battling a terminal illness? Pretty high bar for sportsmanship, I’d say. And a pretty humbling challenge to try and live up to, at least for me. 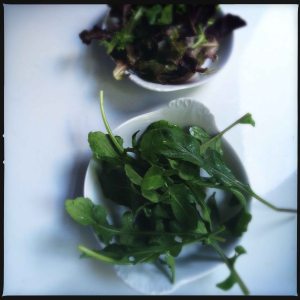 Here are two things I believe to be absolutely, positively true: The secret to a happy life is being a good sport; and the secret to a good salad is salt.

I’ve been working on my salad skills, studying what I like in other people’s preparations and making some mental notes. I’ve long been a fan of the Brianna’s brand of salad dressings because they aren’t overly sweet, and they have simple ingredients. And they require zero preparation – good for the rush hour cook. I’ve been trying, for years actually, to get to the point of using only olive oil and lemon juice, but the salads always tasted bland to me. Then, a few weeks ago, we had dinner with a neighbor and one of the other dinner guests brought salad – best salad ever, I swear. The dressing, she said, was just olive oil and lemon juice (equal parts). “Oh, and salt, of course; a good bit.” Try it; you’ll see.

A friend brought us a quart of maple syrup from Michigan, and we’re down to the last few tablespoons – not enough to serve a family full of pancakes, but definitely enough for this salad from Martha Stewart. Top with poached chicken breasts or shredded chicken meat if you need meat.

The ingredients in this salad from Saveur are some of my favorites, individually and together. Some chopped pancetta would probably work, if you can’t go vegetarian. A whole grain boule would also be tasty (with butter, of course).

This recipe isn’t as hard as it might seem – béchamel is really very easy to make, and the instructions in Saveur are good. It’s really a baked ham, cheese and egg sandwich with a yummy sauce. For the side salad just toss some tender greens with (yep, you guessed it) olive oil, lemon juice and salt.

So, no, I probably don’t have a prayer of getting my people to eat and enjoy this roasted vegetable/lentil salad. But I am not giving up, because the three bite/peanut butter sandwich rule is still in place, and it still works.

Yep, we’re the egg-eating-est people you’ll ever meet. We love them, and sometimes I can get my people to try new things (Swiss chard, perhaps) if there’s egg involved; so we’ll give this recipe, also from Whole Living, a test run.

How about manifesting a little light whimsy in 2023? (P.S. that’s <100 days from today 😱)
Adding something a little different this year: 11x17, month on a page, hangs with a bulldog clip, in … whatever room you like. How ‘bout it?
“So, Mom; you gonna throw Saturday night ragers now that we’re in college?”
Spent the afternoon in a great training session, learning how to facilitate healthy relationship (including healthy friendship!) workshops for children and young adults. Friends with children (elementary school through college): If you’re not familiar with @join1love please have a look and follow along. And follow @kindredplace901 to be in the know when our workshops go live.
This notice is better late than never? Central Gardens Home Tour and artists market, tomorrow (Sunday, 9/12), 1-5 pm. The tour is rain or shine. The artists market is rain or shine unless the rain would be damaging. Will update in the morning if needed. I’ll have @larksomegoods stationery and prints, as well as some recent work, like these paintings inspired by summer trips to St. Simons and Portland. The market is free and open to the public, on Belvedere, between Harbert and Glenwood. Come see us!
Shine on, Memphis.
Join 7,326 other followers
%d bloggers like this: