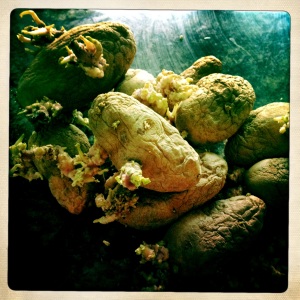 As the final exercise in Tina Seelig’s Crash Course in Creativity, participants were asked to create failure resumes. Yep, a resume of all your worst outcomes. “That will be easy,” I thought, as I routinely feel I have succeeded at absolutely nothing. Then I sat down to write and drew a complete blank. Sure, I had a superabundance of everyday failings – burnt dinners, dead herb gardens, corduroy skirts with the nap going in two different directions. The half-finished chair re-upholstery project(s). The peeling water-based paint foolishly applied over oil. And let’s not forget the potatoes that were lost in the back of the pantry until the smell reminded me of their presence. And all of that’s just in the last five years.

But a resume is for big accomplishments, not ordinary activities. A failure resume needed epic failures, not rotten potatoes.

Years ago, shortly after I moved back to Memphis the first time, an artist friend hired me to shoot a family portrait for their Christmas card. The photos turned out well, we all agreed. The one she selected as the winner is still one of my favorite in my portfolio.

She sent the cards to friends around the country, including a high school classmate who had moved to L.A. and become an outrageously successful real estate agent. Six months later that friend called to say how much she liked the photo and wondered if she could hire me for a family portrait session celebrating her parents’ 50th anniversary. “This is a great opportunity!” my friend said. “You have no idea who her clients are in L.A. This could really put you on the map.”

So I accepted the job and called to schedule the shoot. The only time that worked for everyone involved was three hours before the client’s flight back to California. We set it up, shot a couple of rolls of smiles and happy faces, shook hands and headed out in our separate directions, she to the airport, I to the darkroom.

I shot with infared film in those days; I liked the grainy, surreal quality of the image. Infared is very temperature sensitive and requires special handling, but I wasn’t worried. I’d done this hundreds of times. I loaded the film on the reels, mixed the developer, and put it in the tank for its eight minutes of gentle agitation. The tank felt a bit cold in my hands, but it was August and the darkroom unairconditioned so I didn’t think much about it. I was cocky and overconfident, overly excited about having a fancy client.

I was cocky and overconfident and failed to do a finger test of the water temperature when I was mixing the developer – something I did routinely just as a safety in case the temperature gauge on the sink was wrong. Which it was, that day. It was off by 20 degrees. As a result the film was almost completely clear – unprocessed, essentially, and I didn’t realize it until it was too late.

As I was writing this story on my failure resume I realized the big failure was not in the film processing screw up but in how I handled it afterward – long afterward, after the horrible call I had to make, after the letter of apology, after the initial uh-oh had passed.

I quit. I rang the bell. I gave up. I shrugged it off and told myself I didn’t really want to be a portrait photographer anyway. What I really did

n’t want was put myself out there only to be a failure, because failing felt crummy. Summing up 20 years on a failure resume revealed a lack of subsequent epic failings and overabundance of tiny, meaningless ones mostly because, when given a choice between safety and potential failure, I routinely picked “safe.”

But we’re all candidates for redemption, I guess, even those of us with a history of failing to try, of failing to put it out there and see what happens.

Two years ago today, in a unplanned and somewhat frantic bid to cover up an outdated and unimpressive Web site before my 25th Princeton reunion, I started this blog (happy anniversary, WordPress!). “What do I have to lose?” I said to myself. And, completely surprising to me, it worked out pretty well. Then, cocky and overconfident, I started a second blog. Fail! Only this time I didn’t ring the bell. I just filed it away and kept going.

Several weeks ago, after some prompting and cajoling from some friends, I started writing a book. Will it work or will it fail? Today I say, “who cares?” Maybe there’s hope for me yet.

A few months ago I purchased a copy of David Tanis’s 2008 cookbook a platter of figs, a beautiful book of seasonal menus that has been a lovely decoration on a side table in my kitchen. I finally cracked it open in earnest as part of my summer reading. Some of the recipes are beyond weeknight family dinner cooking, but many are not. Two of them, wild salmon with Vietnamese cucumbers (p. 76) and fish tacos with shredded cabbage (p. 145) are variations on meals that are popular with my people. Hope they’ll like them.

Tanis doesn’t post recipes online, but here is a link to a review and adaptation of his salmon recipe. It’s essentially a simple grilled salmon (wild caught only – don’t bother with farm-raised) served over cucumber pieces that are sprinkled with fish sauce and tossed in a mix of sugar, ginger, chile, lime and herbs. If you want to see the original recipe, I’m afraid you’ll have to buy the book (or check it out from the library). My early report is that it’s a good one, though, if you’re looking to add to your collection.

Since I’m full of confessions today, here’s another: I used to frequent Macaroni Grill for my favorite of their offerings, pasta gamberetti (noodles with shrimp). I long since abandoned the restaurant but still like the dish. I use thin spaghetti; for the sauce, I sauté shrimp (fresh or frozen) in a bit of olive oil and butter until they’re just pink, then I add a handful of fresh spinach, toasted pine nuts and a clove of garlic (minced or pressed – add at the end for fresher flavor). If I have one I’ll squeeze a lemon over it. Use the rest of the spinach to make a salad.

Once again, if you want the original recipe then you’ll have to buy the book. But here is an adaptation that seems close and that, again, gives appropriate reference to the original chef.

This is our summer alternative to fast food – it’s fast, but mostly from the shelves of the grocery. I’ll cook some ground lamb and season with lots of oregano, salt and pepper. Following the taco serving approach, I’ll put the cooked meat in a bowl alongside a platter of marinated feta, olives, roasted red peppers, fresh cucumbers (tossed in salt, pepper, dill and a dash of vinegar), red onion, and chopped parsley. I’ll serve with warm flatbread.

My neighbor calls us the egg-eating-est people she knows. It’s true; we’re egg eaters. And baked eggs for dinner suits everyone in my house. If you need help with the technique, I think Mark Bittman’s instructions are the easiest to follow. If you want to go crazy, you can prepare them the way my mother did in a bain-marie, which is 100 times easier than you think. Serve with a simple salad and some fresh bread.