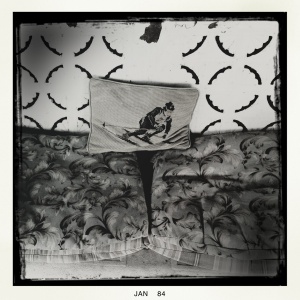 To understand exactly how off limits Martha Stewart has been in our house, you have to know the background of how she made it onto Bernard’s black list.

We found a set of 1950s porch furniture, a glider and two chairs, that Bernard wanted to refinish.  Never mind that an identical-looking, brand-new set was available at Restoration Hardware. Bernard’s the original DIY guy, especially when it comes to restoring cool old furniture and stoves.

For weeks he worked.  He carefully stripped each piece and painstakingly worked Bondo into the holes worn by rust.  He rigged a special set-up for the last step, paint, so the pieces would dry evenly and without bugs flying into the wet paint.  We decided on a combination of white and mint green, close to the original colors, for paint.

We combed the city for mint green spray paint.  We hit every paint store, every Home Depot, every hobby shop and then headed to Sears.  At the third Sears store, in the middle of the paint sections, on the bottom shelf, we finally spied the color we were looking for.  I am not patient generally and particularly not when it comes to shopping.  When I saw that mint green color can top, I was ready to dance to the checkout.

“Oh, for God’s sake, it’s the right color, it’s spray paint, we’ve been looking all day.  Would Sears sell something that didn’t work?  Would Martha Stewart put her name on it?!”  Yes, that’s actually what I said.  I needed a nap.  And a cocktail.

So we bought the paint and went home.  Early the next morning, so it would have the entire day to dry, Bernard headed to the garage to put the finishing touch on his masterpiece.  Early in the afternoon he came in the back door, spewing his best South Park-style Martha Stewart parody (laced with expletives, so I won’t try to recreate it).  The paint dripped before drying.  Latex paint can’t be sanded, only stripped off and reapplied.  Stripper also removes Bondo, as it turns out.  So stripping the dripped Martha Stewart Living mint green paint rendered the piece back to its original state of disrepair.

That furniture ended up in a scrap pile, and “Martha Stewart” became the Voldemort of our house, she who must not be named.

Over the years Bernard has even gone as far as boycotting a dinner I made just because he knew the recipe came from Everyday Food magazine.  It wasn’t his fault for selecting the wrong paint or mine for pushing him to buy it; it was that charlatan Martha Stewart, and that’s that.

Understand, then, the significance of this next statement:  I take back every ugly thing my family and I have ever said or written about Martha Stewart.  Really.  On my late mother’s behalf I take back that terrible thing she said about how “that woman” was nothing but a recipe-stealing Junior League wannabe, “as if she could have gotten in the Junior League.”  I’ve told Bernard that it’s time to let bygones be bygones and move on.  That’s how good Martha Stewart’s Baking Handbook is.

My method for vetting a cookbook is pretty straightforward.  I prepare 10-12 recipes 2-3 times each, following the directions (at least for the most part, and always when it comes to baking).  If the food turns out perfectly each time, then the cookbook passes the test.  Passing the test doesn’t mean that every single recipe will be 100% perfect, but getting a perfect 10 out of 10 sampled is a harder test than you might think.  Plenty have failed:  Dean & Deluca Cookbook, Best of Gourmet, every Rachel Ray book, as well as Tyler Florence, sadly.  I can’t even give my beloved Fannie Farmer Cookbook the official stamp of approval; her recipes are a great starting place, though, if you’re comfortable winging it in the kitchen.

The books that have made the cut in my kitchen over the years are these:

I do not have the other Chez Panisse cookbooks, but they’re on my list now that I’ve vetted The Art of Simple Food.  Another that is high on my list, even though it’s delivered a handful of disappointments, is The Nantucket Open House Cookbook (Sarah Leah Chase, 1987).  Her recipe for lace cookies is flawless.

Anyway, on with the Martha Stewart take-back, make-up:

Our downstairs heat went out on January 2.  I noticed it wasn’t working because it was 46 degrees in my kitchen, even though the thermostat was set at 68.  We were at the tip of the Polar Vortex onslaught, and the part required to repair the heat wouldn’t be in for several days.

We tacked sheets and blankets over all the downstairs windows and closed off all but two rooms, the kitchen and the adjoining sitting room.  From the outside, ours looked like a crack house.  On the inside, with nine space heaters plugged into six different circuits, it looked like Nanook of the North’s baking school, where bakers and students must dress in four layers and keep the oven running, churning out a non-stop stream of baked treats with the cabinet doors under the sink open in order to keep the pipes from freezing.

That long weekend I gave the Baking Handbook a workout.  I had already tested the cornmeal drop biscuits, popovers, sugar cookies, royal icing and blueberry muffins.  During what Bernard, whose cabin in Wyoming had a fireplace but no heat, dismissed as “a little cold snap,” I tested the rugelach, French almond macaroons (sic), one-bowl chocolate cupcakes, mint-chocolate ganache, shortbread fingers, and Swiss meringue buttercream.  All worked perfectly; and even though I think rugelach dough is better without Martha’s addition of an egg, I can’t say her recipe wasn’t tasty.

So now the Baking Handbook lives on the good shelf, the one in the kitchen, alongside its fellow test-passers.  And those one-bowl chocolate cupcakes even bought Bernard’s forgivness on a cold, cold day, in a crack-house-looking kitchen, a redemptive start to the new year.

Even though The Best of Gourmet 2000, Flavors of Thailand, didn’t make the cut (a number of the recipes are just gross), a handful of the recipes are both easy and delicious.  I’ve learned one way to tell the good from the bad quickly: the good ones made it to some online source, while the bad ones are nowhere to be found.  Here are the Tandoori Spiced Chicken, the Basmati rice and mustard seed pilaf, and the carrot salad, all archived on Epicurious.

This recipe is a new one for us, picked from the archives of The Girl Who Ate Everything.  I’m worried a little about the sweetness, but it looks pretty straightforward and like something my kids will enjoy.

All of these recipes are from the old stand-by, Barefoot Contessa: How Easy Is That?  All of the recipes are available through the Food Network; here are the links:  Creamy Parmesan polenta, roasted butternut squash, garlic roasted cauliflower.

This dinner is as easy as breakfast for dinner, and just at well-loved at our house.  I usually buy bangers at Fresh Market and use Yukon Gold potatoes.  Any chicken or veal sausage will work, and here’s a recipe for Ina’s mashed potatoes if you need one.  I serve with a variety of mustards, although my kids will always ask for ketchup.

Bernard’s one request this week is that we please have crab cakes.  Since he asked for lasagne last week and was disappointed, this week I’ll try to make it up.  I, of course, use the Barefoot Contessa recipe for crab cakes too; but Bernard prefers this one that he found online.  Serve over plain green leaf salad.