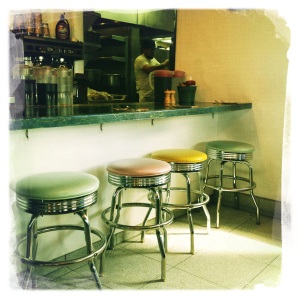 My ex-brother-in-law was an NCAA cross-country rock star.  Full ride to UMass.  Number one on the team.  The running dude.  Then, as happens to many a talented athlete, a torn hamstring put him on a different path.

One weekend, years ago now, we were at dinner in Omaha – my sister, her then-husband, and I – lamenting how we’d all let ourselves go (we were barely 30).  What had happened to the young, shiny, college versions of ourselves?

The next day, a Saturday I remember well, running dude got up, got dressed in shorts and sneakers and went out the door.  10 minutes later (if that) he was back.

“I jogged down to the corner and back,” he answered.

“Because doing something is better than doing nothing.  Put on sneakers, walk to the mailbox if that’s all you’ve got, but decide to do it every day.  Eventually you’ll feel like doing more.  That’s what we’ve all forgotten.”

It’s one thing to read a Confucius quote on a calendar and quite another to hear its reality from a balding, slightly overweight, former running champion and hard core Yankee who’s married to your little sister.  Although Margaret and I made fun of him that day (ok, most days), his words stuck with me.  In diet, exercise, budgeting, business turnarounds – anything, doing something is better than doing nothing, even if it’s just the proverbial walk to the mailbox every day until you feel like doing more.

Four years ago, when our home life was the kind of chaos unique to families with young children, I decided that, on the long path to restoring order, we were going to begin by tackling dinner, and we were going to take our first step by sitting down at the table, one night a week.  If that one dinner consisted of fast food or frozen pizza or Hamburger Helper (the only thing Bernard said he could make for dinner), then so be it.  We were having dinner at the table as a family at least one night a week.  The end.

Just so we’re clear, in the first few months we did actually eat fast food and frozen pizza and Hamburger Helper, I kid you not.  And even though I said I would be OK with Hamburger Helper, I was grossly unpleasant, even unladylike about it.  True enough, I decided to start with sitting down; but I promptly grew impatient and forgot that unless you are 100% comfortable walking to the corner, you will never be ready to walk around the block.

A year later, three years ago now, I renewed the pledge to start by sitting down.  On this second go-round. however, I armed myself with a homespun weekly menu plan.  It was nothing fancy, believe me.  It was a four week rotation that included chicken quesadillas, turkey burgers, grilled flank steak and breakfast for dinner (scrambled eggs and toast).  Everything on the plan was kid-friendly.  Nothing on the plan required advanced cooking skills, or even recipes.

Fast-forward another two years, a year ago now, and my entire family was ready to step up our game.  I wanted to cook more, something I enjoy, and my daughter wanted to help.  I also wanted to embrace at least the most basic of Michael Pollan’s rules.  Bernard was tired of eating chicken quesadillas.  My son – this is true even if you won’t believe it – asked for more salads at dinner.  It was time, and we were all well-trained on the route to the corner and back.

If your struggle is, generally, “family dinner,” then here’s my suggestion: start by deciding one thing you’ll do differently this year.  We started by sitting down, one night a week.  It took four years to get to five nights at the table, eating an array of freshly prepared real foods.

You might start from an entirely different place – eating vegetarian one night a week, or trying one new recipe a week.  Wherever you are, wherever you start, just remember this: doing something is better than doing nothing.

Walk to the mailbox if that’s all you’ve got.  Do it with gusto and style, every day, until the day comes when you might feel like walking farther.

What’s next for us, now that we’re comfortable with weekly farm plates, fed (mainly) by ingredients my grandmother would recognize as food, and so accustomed to sitting down for family dinner that doing otherwise feels weird?  Honestly, I’m not sure.  So for 2014 we’ll keep walking this route.  For me, and for my family, that’s enough for now.

Journey of a thousand miles….

For the first full week of the new year, we’re going to stick with the basics.  The five dinners on our weekly plan are my five current go-to, easiest dinners.

Simple Pasta with Meat Sauce (adapted from Marcella Hazan’s recipe)
Sauté an onion (chopped or finely chopped) in some olive oil until onion is soft.  Add a pound of ground beef or turkey and cook until all of the meat is browned.  Add a can of diced tomatoes and a bit of tomato paste, only if you have a can or tube open (it’s not essential).  Cook until liquid is mostly evaporated, about 10 minutes.  Stir in 1-2 Tbsp. butter.  Serve over wide noodles (pappardelle or No Yolks dumplings) paired with a simple green salad.

Parmesan Chicken (adapted from my friend Marjorie and from Ina Garten’s recipe)
Preheat oven to 350 degrees and line a baking sheet with parchment paper.  Take four skinless, boneless chicken breasts and pound between parchment sheets until they are about 1/2 inch thick (you could also buy prepared cutlets; you’ll need two per person).  Marinate the chicken in Italian dressing (any brand will do) for 30 minutes (or more, if you have time).  Mix together equal amounts of bread crumbs and shredded (or grated) Parmesan cheese (about a cup of each), and pour onto a large plate.  Dip the chicken, a piece at a time, in the bread crumb/Parmesan mix, coating each piece fully.  Place on prepared baking sheet.  Bake for about 25 minutes, until cooked through.  Serve with a simple green salad and warm bread.

Cheese Soufflé (my mother’s recipe)
Preheat oven to 400 degrees.  Separate 5 eggs and let them sit at room temperature.  Butter a souffle dish and dust with grated cheese (Parmesan works well).  Make a basic white sauce using 2-3 Tbsp. butter, 2-3 Tbsp. flour and about 1-2 cups milk.  Stir in 1-2 cups grated cheese (Fontina and Gruyere seem to work best for me, but really any hard cheese or mix of cheeses will do), a pinch of salt, a pinch of cayenne pepper and a dash of Worcestershire sauce.  Beat the egg whites until stiff but not dry.  Warm the egg yolks by stirring a bit of the cheese sauce into them, then add the yolks to the sauce and stir well.  Stir in half of the beaten egg whites then fold in the other half gently.  Pour into a buttered souffle dish and place in preheated oven.  Reduce temperature to 380 degrees and bake for about 40 minutes.  Serve immediately with fresh fruit and/or green salad.

Shrimp (or Fish) Tacos
For shrimp: sauté peeled, deveined raw shrimp in some olive oil with garlic, a bit of seasoning (cumin, cayenne), and lime juice; or let cooked frozen shrimp thaw in a marinade of olive oil, lime juice, garlic, salt and spice (pinch of cumin, bit of cayenne, etc.).  Serve with warm tortillas, shredded lettuce, cilantro, avocado, tomato, onion, jalapenos, salsa, lime wedges and sour cream.  NOTE: I don’t serve shredded cheese with shrimp tacos.  Gross.  I do sometimes, if I have time, cook rice to serve with the other fixin’s.

For fish: if you have time to make your own battered fish (or grilled, seasoned fish), well then bully for you.  We use Ian’s fish tenders, which are ready in about 18 minutes from the freezer.  Serve as above, with or without shredded cheese.

Vegetable Plate
(Always four: one green, one starch, one colorful, one whatever)
This week it will be garlic spinach, stone-ground grits, blackeyed peas, and raw carrots