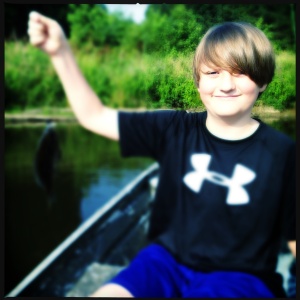 My son caught his first fish on a fly rod last week. He had begged for years to go fishing; he had seen all my gear in the hall closet and wanted me to show him how to use it. Finally last week, thanks to an invitation from a dear friend, he got his chance. His first experience, catching 8″ bass and bluegill on a 3 weight rod in a little skiff on a Mississippi lake, was entirely different from mine but with the same result: he can’t wait to go again.

The first time I went fishing, and by fishing I mean fly fishing, was the fall of 1993. A week earlier I had been with my friend Jack, a photographer, helping with a photo shoot that he called something like “Main Street Maoris.” He asked three business people to suit up in their finest Brooks Brothers and then have their faces painted like Maori warriors. For the photo they were seated at a board room table, Montblancs in hand, tongues fully extended. I have no idea what became of the shot or if it made the fortune in the stock photo market that Jack hoped for. When he asked if I wanted to come look at the proofs the following week, I told him I couldn’t because I was going to visit my sister who had just moved to Wyoming.

“No really, you’ll love it! I can teach you how to cast and you can borrow my wife’s fly rod.”

Jack has always had a boyish enthusiasm for life. Everything is an escapade, and he leaves no gracious way to decline any of his suggestions for adventure.

24 hours later we met for a brief casting lesson at the yacht club, and by yacht club I mean a rickety pier in the backwash of the Mississippi River where approximately seven people kept boats. After about 45 minutes, Jack patted me on the shoulder, handed me his wife’s gear, and said, “you’ll be fine; it’ll be a blast,” by which he meant “you pretty much suck at this, but you should give it a try anyway.” Off I went.

I traveled frequently for work then, and I always dreaded airports because I was a magnet for the airport crazy people. It was long before 9/11 and security was very different. There were always random wanderers, and the strangest of the strange ones made a beeline for me. As I walked through MEM with that long silver case in my hand on the first leg of my trip to Wyoming, however, the only people who spoke were ruggedly handsome men who seemed completely normal.

“That’s a great river. Probably late for mayflies though, right?”

The same conversation was repeated at least six more times during my layover in Denver. Not a single Harikrishna even looked my way. I was definitely buying one of these things when I got home, even though actual fishing was going to be a stretch for me.

In our youth, my sister had been more outdoorsy than I was. She and Daddy used to hike and fish on occasion. I think she even went camping, in a tent. Outside. I, on the other hand, liked to cook and sew and read fashion magazines. I did not fish, hike, or do anything that involved going to the bathroom in the woods.

As we entered our 20s, however, my outdoorsy medal-winning swimmer of a little sister was teaching ballet while her girly-girl non-athletic older sister was playing tennis and running trails. I had even, on a long run, ducked behind a tree for a health break.

To me, the Jackson of 1993 was paradise. Although Harrison Ford’s daughter was a student in one of Margaret’s classes, the town wasn’t yet overrun with swimming pools and movie stars the way it is now. It was big enough to have an airport, small enough to feel cozy and authentic enough still to have real cowboys in the Cowboy Bar.

My sister hated Jackson. She thought the Western quaintness of The Rancher and the antler arches were cute, but she found nothing in common with the people she met and swore there was nothing fun to do. After six weeks she was lonely and depressed, which is why I went to visit. I thought if she had a buddy to experience some of the beauty, beauty, beauty out there, she might actually start to enjoy it.

On the ride from the airport to her apartment I told Margaret I had booked a guide to take us on a day trip down the Snake River. She was agreeable but surprised. When I told her that the fly rod was the magic talisman that warded off crazy freakshows, Margaret suggested maybe I should just buy one, carry it around, and skip the whole get-in-a-boat-and-catch-fish part. We debated that idea but agreed we might as well give actual fishing a fair shot.

We headed to the Orvis store to confirm the details of our trip and procure the necessary supplies. I remember very little other than handing over an enormous sum of money and hoping Jack was right about how much fun we would have. At the suggestion of a crusty old guy sitting next to the counter, I also bought disposable hand warmers, despite the fact that I heard him mumble under his breath something unflattering about sissy Southern girls.

Early the next morning we rose, hours before any human being should ever get out of bed, and drove to the town dump, the rendezvous point for meeting Carter, our guide. The dump had plenty of parking and was well-marked, so Carter thought it would be easy for us to find. As if I could make that up? 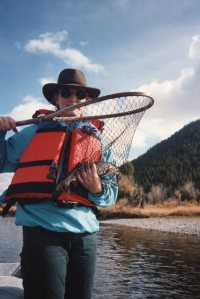 We drove upriver, got a quick lesson and set off downstream. It was a crisp, beautiful fall day. We floated a bit, stopped for snacks and lunch, then floated some more. In our six or seven hours in the boat I caught 954 fish, give or take 940. Margaret caught one. Power Bait may secretly have been involved, but I could never prove it.

We climbed out of the boat around 4:30, just as the sapphire sky was just beginning to darken. We walked to our car, a happy big sister and a grumpy little one, sunburned, tired and cold, having depleted every damn one of those hand warming pouches. We went to a diner and inhaled warm food. We went home and slept like rocks. Right before we nodded off, Margaret said, “You caught more fish, but I saw your butt when you went pee.” Things only your sister, your only sister, can say.

For the rest of the weekend we hiked and shopped and did every touristy thing there was to do in Jackson. We did not discuss the epic adventure now known as Margaret’s one fly fishing expedition, although I couldn’t stop thinking about when I could go again.

We learned a bit about ourselves and a bit about each other on that trip. We learned that on any given day one person may catch more fish than another, that new adventures are more fun with your favorite sister, and that at the end of a long cold day, food helps. A lot. 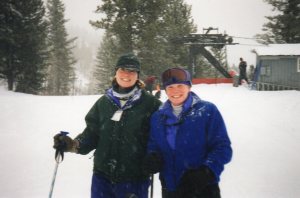 To this day Margaret will tell you that she hates stupid dumb good-for-nothing fly fishing but still loves being outdoors. She changed her tune about Jackson after she met a ruggedly handsome transplanted Yankee. He taught her how to ski, something I never could master. Now a mother of four, she’s even discovered she likes to cook and sew and read fashion magazines sometimes. And despite having dragged her down a cold, fishless Snake River 20 years ago, I’m still her favorite sister.

I have multiple rods, reels, waders and flies, all of which traveled with me to countless trade show for years after that first trip. I went back to Jackson several times and even caught a ruggedly handsome man of my own, albeit one who hates to fish. I still like to cook and sew and read fashion magazines, and I still prefer a hotel to a tent. I did go camping in the Black Hills once, though, just because my sister asked me.

20 years later, I still have a favorite sister. And now, thanks to netting the best man in her wedding, I have a fly fishing buddy, too.