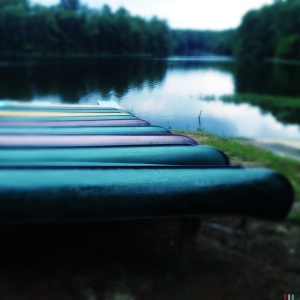 That a future movie star’s resume would not need “summer camp” was the basis of my argument. I feel certain my mother knew the real reason had more to do with my aversion to heat, bugs, and anything athletic, but she allowed that to remain our unspoken secret and never sent me to camp.

I happily reached adulthood without any classic moments of learning a new skill in a foreign environment, far from the comfort of home. Not having an actual camp experience, I imagined it as bunking with strange cabin mates, learning camp songs and being christened with summer-only nick names, none of which seemed appealing.

The real spirit of summer camp found me when I was 27. Two years before I had dated a guy who played tennis, and he suggested I give it a try. I put on a J Crew mini skirt and a 10 year old pair of Tretorns and took my first tennis lesson. Tennis stuck; the guy didn’t.

After a few weeks of private watch-the-ball lessons, the instructor suggested I try a Tuesday night clinic with some other adult women who were just beginning the sport. I met Barbara the first night of the first clinic. “I know you; your mother was the first person I met when I moved to Memphis,” she said. 15 years my senior, Barbara drove a blue Subaru wagon and had a wickedly cynical sense of humor, just two of the many things we’d find we had in common.

Tennis became our escape from our normal everyday lives. We practiced on the back courts, under the cover of night, for more than a year. As we improved, our tennis circle expanded bit by bit. We were competitive, to be sure, but we had no illusions of going on the Tour. So along the way we adopted an uncodified set of values that might be described as Fun, Friends, and Frolic. Anyone who played by our values could enlist in our group.

If you asked each of the five of us, the founders of Camp Tennis, how we got started, you’d hear five different answers. For every detail I remember there are at least 100 I’ve forgotten, but here are the basics:

On an early summer Saturday morning, four of us played a lively doubles match and lingered afterward for lunch. The weather was seasonable, and lunch extended into early afternoon. A fifth friend joined us, and an afternoon doubles match, with a slightly different grouping, came shortly after, followed by dinner. We jokingly called the dawn-to-dusk slate of activities “Camp Tennis,” and we agreed we should do it again soon.

Camp Tennis lasted the whole summer. Barbara, our camp director, organized our schedule. Elizabeth, our camp counselor, guided activities that included learning to pick up a tennis ball by bouncing it with a racquet – an advanced Camp Tennis skill. Jeanne and Molly, who can best be described as Mary Ann and Mrs. Howell, provided constant and unpredictable entertainment. I was Julie McCoy, camp activities director.

We played tennis and socialized from Friday evening through Sunday dinnertime most weekends. Our communal meal mainstays included chicken fingers, fruit plates, Thin Mints and Amstel Light. Occasionally our camp cohort went on exotic expeditions that ranged from fly fishing to concerts. During the summer we learned that Barbara could cook; Molly could call for room service. Jeanne had a white tennis bonnet; Elizabeth rarely wore matching socks. I was always 10 minutes late. In addition to learning about one another we learned vital life lessons that would last a lifetime, such as never using Clinique instant tanning lotion, not even to disguise tennis sock tan lines.

That summer belonged to us, two Memphians, a Virginian, a Connecticut Yankee and a Bostonian. We were five strange cabin mates who learned camp songs and made up summer-only nicknames and learned new skills in a foreign environment, far from the comfort of home. We won trophies and made t-shirts to prove it.

Twenty years later three of our original five reconvene on the court every Tuesday night. Our current fourth player joined the group the summer after the inaugural Camp Tennis season, having clearly passed the Fun, Friends and Frolic values test. At the end of our weekly match we now make sure to stretch our aging hip flexors and limit our intake to just one beer. From time to time we wonder what mischief Jeanne is cooking up in Texas, and we hope Elizabeth keeps a watchful eye from above.

With a nod to the real summer camp where my daughter sleeps tonight,

May the spirit of Camp Tennis be with us always. May it guide and protect us where e’er we go. Nobody else can find it for us. We have to find it ourselves.