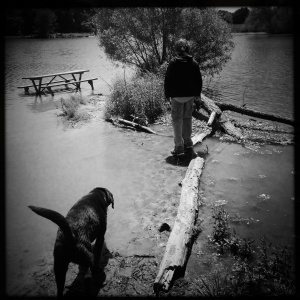 Yes, roll, not role. Think: “roll with the punches.”

A Psychology Today article titled, “A Nation of Wimps” made the social media rounds earlier this week. It’s a long read (but a good one) with a short takeaway: overinvolved parents have raised a generation (or two) of young people who are too fragile to handle life’s ordinary setbacks. They’re the anti-Timex kids: they have no idea how to take a licking and keep on ticking.

Yep, being a parent is forever wearing your heart on the outside of your body. You feel every injury, every insult that comes your child’s way. The instinct to protect, to jump in and steer the wreck, is strong. Even stronger may be the desire to serve as a perfect role model, highly organized, accomplished, caring, and to try and shape the child into the mold. We want our children to see and to be good community servants, kind neighbors, strong leaders. We want them to succeed beyond our wildest dreams.

Maybe what they really need to see is how we fall down and get back up again, how we deal with whatever comes our way and just keep moving. Maybe they need R-O-L-L models as role models. Then, just maybe, we need to let them try it too. Maybe, instead of calling the teacher to see if he’ll overlook the late homework and maintain the child’s good grade, we need to admit that we missed a deadline once, got in trouble at work, and learned from it. We need to let the “F” on the homework stand.

Last week was career week at my children’s school. The fifth grade class received, among other goodies, cute white ceramic piggy banks from one of the parents who is, as you might guess, a banker. “Take them home and make them yours. Feed them every day. Be very careful with them!” the parent advised.

My son and a friend came home Friday night, goodie bags in tow, and spent hours drawing cartoons on their pigs and giving them funny names. Saturday morning we drove the friend home, and the boys sat in the backseat making up stories about their characters. When we arrived at the house, the boys got out of the car, set their pigs on the roof and took pictures to capture the moment. The friend went inside, and we drove off.

I heard a strange rattling and thought my car had a problem. As I rounded the corner, my son cried out, “Oh no! My piggy bank!” There it lay, shattered on the street. We circled around so he could pick up the $2.35 he’d stashed safely inside. The broken pieces of the bank were beyond repair. He pocketed only the rubber plug, decorated with his signature yin-yang symbol, and he berated himself all the way home, furious that he’d been so irresponsible.

The urge to call the banker-parent and beg for another stupid ceramic piggy bank was almost overwhelming. I resisted. The next day, I asked my son if he were still mad at himself (as if I didn’t know the answer?). “Yeah, kind of. But you know what I was thinking about? I was thinking about that day when Coach Tab was yelling and waving at you when you were driving off from our baseball game because you’d left your favorite coffee mug on top of your car. You were busted, Mom, so busted.” Then he smiled that good smile, the smile I love most.

My inner Type-A demon is going to battle my better self for many years in times like these, I know. But I think it might be worth putting up my best fight, because maybe, just maybe, if my children experience life’s delights and disappointments equally, then one day they’ll know, deep inside, that they’re ok. And even though the little bumps in their ride will feel like unbearable turbulence for me, maybe I’ll be ok too.