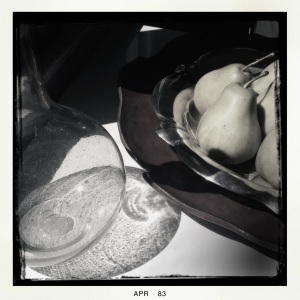 My mother went to Mexico once, maybe 15 years ago, as the guest of a friend who owned a house there.  Mama came home with a beautiful glass bottle and set of table linens for me.  She also brought back an impression of a sad, beautiful, impoverished, entitled, dangerous place where the few privileged were increasingly walled off from the many, many who were struggling.

She wrote about her trip in the Memphis Business Journal, and the article, when published, ended her friendship with the woman who had been her host for the trip.  The woman took issue with my mother’s interpretation of Mexico’s wealth/poverty disparity and the environment that dynamic created for a first-time U.S. visitor.  She was offended that my mother had written about life outside the walls of her well-kept hacienda as if acknowledging the less than savory aspects of the place somehow tarnished its overall beauty.

I was thinking about that article this morning, preparing this week’s menu with a nod to next Sunday’s Cinco de Mayo celebrations.  I looked at the lovely glass bottle that sits in my kitchen and thought of my mother, how she saw everything yet never gave up hope that good would prevail.  And even though she saw things in Memphis that looked a whole lot like what she saw in Mexico, she never gave up on her adopted hometown.

So I wonder what my mother would have to say about the fool of a sports writer at the LA Times who decided it was appropriate to trash Memphis in his column Friday.  My mother, who was irate that I was part of the PR team that helped bring the NBA Grizzles to Memphis in 2001, did not like basketball.  She didn’t really like any professional sports and thought all pro players of every game were thugs.  But my mother loved Memphis, and even she would be a Believer if she were still around, even if it meant supporting pro basketball.  Because the good things are good, no matter what.