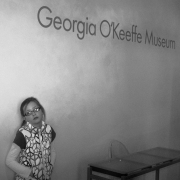 On my second trip to Santa Fe, in the summer of 2001, I was seven months pregnant and looking for things to do in air conditioned places during the daytime hours when the sun was hot. Top on my list was the O’Keeffe Museum, which hadn’t yet opened when I first visited Bernard’s home town.

“Ack, no. Henry C. did not like her. She was not a good artist,” Bernard’s mother declared.

And that was that. I didn’t have a car, I was enormously large with child, Bernard was out cavorting with his brother, and I was stuck. Instead of seeing the museum, I sat in the living room and heard the story of Henry C. Balink, how he came to America, how the Taos Society of Artists tried to have him deported, and how he gave painting instruction to President Eisenhower. It was a fascinating story. I also learned that no matter how talented any family member, by birth or by marriage, might be, there would always be only one artist in the Balink family, The Artist, Henry C. Balink.

Henry C., The Artist, apparently thought Georgia O’Keeffe all marketing and no talent; at least that’s the way the story made it through to later generations. I don’t know what he actually said, but I do know that most artists are very opinionated when it comes to assessing the talents of others. I can also see how a classically trained portrait painter of the early 1900s might have taken issue with O’Keeffe’s departure from classical style and technique.

I remember the first time I saw O’Keeffe’s work. I had a steady babysitting gig for mom who was an artist, one whose work I admired and whose sources of inspiration also inspired me. She had shelves and tables full of art books, and one of them was the iconic O’Keeffe monograph from the 1970s, the one with the painting “Summer Days” on the jacket. I read the book cover to cover, studying each image carefully and wishing I could see them up close.

When I was in college I discovered the beautiful Stieglitz portraits of his artist wife. I loved how they were both soft and strong, how each held a fragment of their private, intimate story. Those photographs of O’Keeffe led me to the portraits by Julia Margaret Cameron, which led me to view cameras and gum bichromate printing and all sorts of other wandering discoveries that became my field of study, senior thesis and lifetime pursuit. That is, I think, how the thread of artists works, each weaving its way to another. I loved then, and still love, some of the stories about the artists as much as the art itself. Which is why I wanted to go to the O’Keeffe Museum, to see her story in its home setting.

This year I finally made that pilgrimage. Ironically, the traveling show on display there was the Smithsonian Institute’s “Annie Leibowitz: Pilgrimage,” a wonderful chronicling of her development told through photographs of her many Muses. It was a fun exhibit, and even my daughter, bored by the entire outing, giggled over having traveled all the way to New Mexico only to see photographs of Graceland.

The interior galleries of the museum were dedicated primarily to O’Keeffe’s works on canvas. I know that before that day I had seen some of her paintings. I remember seeing them at MoMA and The Museum of Fine Arts in Boston and the Art Institute of Chicago. I couldn’t have made that up. So how could I not have seen before what I saw in Santa Fe? How could I have missed that, although she was indeed a fascinating woman and true iconoclast, Georgia O’Keeffe was, in fact, a terrible painter. “The Artist,” it seems, was right.

It might have been a disappointing end to a trip with high expectations. But beyond those walls of O’Keeffe paintings was one more small room, an unexpected treasure. In that tiny innermost gallery I found the landscape portraits of O’Keeffe by the late photographer Todd Webb.

I had never heard of Todd Webb, despite having a degree in art history and photography. I’ve since learned that he was a fan of Eugene Atget, one of my favorite photographers, and that he kept the good company of Harry Callahan and Robert Frank. He was a stockbroker, broken by the Crash, who became a photographer almost by accident. His photographs, all new to me, were stunning, each with familiar style elements of the time and yet utterly unique. They were architecture and portrait and landscape combined in each marvelous print. Unfortunately there was no accompanying catalog for me to bring home and savor.

Discovering Webb’s work that strange day in Santa Fe was a sort of epiphany, an artist’s nudge. It reminded me that there’s always a new way of looking at familiar things. There’s a new quest for every artist. There are hidden secrets, waiting to be told.

One thought on “Artists, part two.”