She’s a Savannah girl, transported to Memphis to follow her true love. They met at Duke, years ago. Later they would tell different stories about their early romance, but the common narrative was that they married other people, had families, lived lives apart and then rediscovered one another, each newly single, during a reunion weekend.

By the time we met Harriet and Alfred I was 38, and they’d been married longer than I’d been out of college. When we moved in next door to them our fledgling family was struggling to cope with the recent loss of my mother and an accelerated move into a century-old home with its renovation only half complete.

Their house was built on a sliver of property once a side lot to our newly acquired Money Pit. It sat back from the street and was the only one on the block with a flat patch of grass suitable for playing catch and racing through sprinklers. A respectful few days after we unloaded the last boxes, they knocked on our door with a warm welcome and firm set of instructions: our children must play in their front yard. The children who ran circles in the yard when they first moved in, Harriet explained, were now grown. Ours would have to take their places because, she said, nothing was more enjoyable for old people than watching young ones frolic. 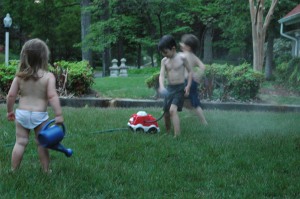 We wandered over tentatively at first, but we quickly realized they meant what they said. To prove it they routinely rewarded the children’s arrival with sleeves of Thin Mints, pitchers of lemonade and loads of ice cream sandwiches.

We had landed on the block in February, when the peppermint camellias were just beginning to bloom. Harriet taught us how to care for those camellias and later, in the early summer, she did the same for our oversized gardenia. Her only request was that she might take a cutting here and there, as camellias and gardenias were her very favorite flowers.

Alfred became our son’s first employer, not knowing the child was only three at the time and perhaps too young even for the task of daily newspaper retrieval. Every Sunday afternoon Alfred lumbered through the yard to deliver the child’s weekly pay, complete with a handwritten note of encouragement on the envelope.

They took great interest in the children’s schooling, asking about their studies and sending special congratulations for good report cards. They brought us See’s candies for Christmas, and we cooked them brisket for Rosh Hashanah. Their social and travel schedules made us dizzy, and their fond affection for one another made us smile.

Halloween morning two years ago Harriet awoke to discover that Alfred had taken his final rest. In the days after his funeral we promised her children, who lived far away, that we would watch over her so she wouldn’t be afraid living alone. In truth it was we who were terrified of her moving, of losing our steady touchstone.

In the spring, having inherited the newspaper delivery employment enterprise, Harriet announced with great flourish that she was promoting our son to CEO and appointing our daughter CFO, responsible for coming next door every Wednesday to collect. Their new positions came with increased wages. When the children told her they would gladly bring her paper to the door each day without being paid, she became indignant. She looked me squarely in the eye and said I should never forget that a job well done must always command a fair salary. “Your mother has some things to learn, but she’ll get there,” she told the children with a wink.

By summer she was traveling again, taking classes and going out with friends when she was home. The part of her that withered when Alfred died took on a new sparkle, like she wore both of their spirits together. One evening she came over unexpectedly to tell me she was going on a cruise, leaving in less than a week. She hadn’t told anyone any sooner because she was afraid someone would talk her out of it or make her afraid or somehow spoil the fun. She was nervous and excited, and her excitement was so contagious that I forgot I’d left a skillet full of butter on the stove and almost burned the house down. “Oh, my dear, I’m rubbing off on you!” she exclaimed, and I thought what a wonderful thing that would be if it were true.

Harriet returned from her long trip in time to wish my son good luck at the start of his fourth grade year. She had been a fourth grade teacher and said emphatically that fourth grade was the best year of all. Within a month he was furious that she had lied to him, furious that fourth grade was, in fact, the very worst of all possible years. She laughed and promised by the end of the year he would see she’d been right. And then she took to checking on me, not him, every few weeks. By the end of the year he would be a different child, an older and more mature child, she assured me.

He was. They all were, my son, my daughter, and their contemporaries on our block. They’d graduated from sprinkler chasing to street tennis, bike riding, school sports and the much-dreaded video games. They were little people who went to sleep-away camps and summer programs and on out-of-town trips with friends.

In November Harriet told us she was moving. Her granddaughter was expecting a baby, the first great-grandchild, and she wanted to be there. Her people, her real tribe, were all in California. She wanted to join them while she still felt energetic. In a matter of weeks the house was swept, prepped and sold, ready for transfer early in the new year.

On Sunday she had everyone over for cake and ice cream, as she had for Alfred’s 85th birthday the April before he died. This afternoon our block’s matriarch will hand her keys to a betrothed couple who were born the year she and Alfred moved into their first and only house together. Tomorrow, after a visit to the cemetery, she’ll board a plane and head west.

“It’s right, isn’t it? Am I doing the right thing?” she fretted.

“It is right,” I assured her, and I kissed her cheek and walked home.

I miss her already. 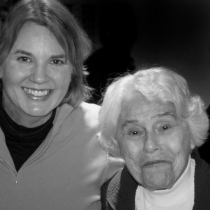